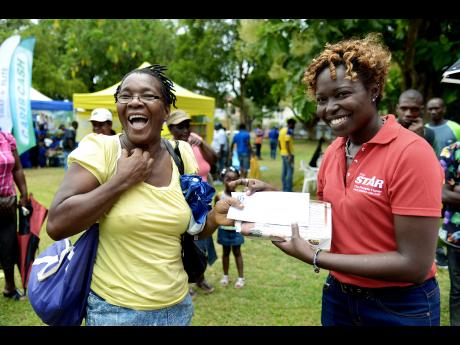 Vinette Williams won one of the $20,000-scholarships offered by 'THE STAR' at the bazaar.

Hours before Mary Ellwood attended the RJRGLEANER Communications Group's annual Back-to-School Bazaar on Saturday, she went into a session of prayer and fasting.

Posting her entries with faith, the Kingston woman was elated when her nephew Joshua Bonner was chosen as one of the winners of a $20,000 scholarship, courtesy of The STAR and Lucky Dollar Furniture and Appliance Store.

With outstretched arms, she explained that her nephew is extremely deserving of the financial assistance because of his impressive academic performances.

"Him a do really well inna school. Mi fast and pray fi dis ... him mother sick bad and his father mentally challenged. I was working to pay his extra lessons and I entered all five of my sister's children names. I didn't know if any would be selected, but I am glad one of them was," she said.

Ellwood said their mother always tried to work but couldn't because of her condition.

"I also made entries for some of my church sister's kids. This scholarship will do a lot for my nephew ... thank you, Jesus," she said, before uttering another prayer.

Like Ellwood, Velma White was just as estactic when her grandson was announced as a winner also.

"Is me two grandchildren name me enter, because dem mother run way leave dem on me from dem a baby. Me do domestic work just two days a week and get $7,000, and a it me use take care a dem. Only God know how happy I am today," the Old Harbour resident said.

In addition to the 15 scholarships presented on the Devon House south lawn, there were lots of other prizes and surprises.

The bazaar also had several booths that offered great deals or services such as free eye, medical, and dental screening.

Sangster's Book Stores and Carlong Publishers were also on location, offering big discounts on textbooks and other supplies.