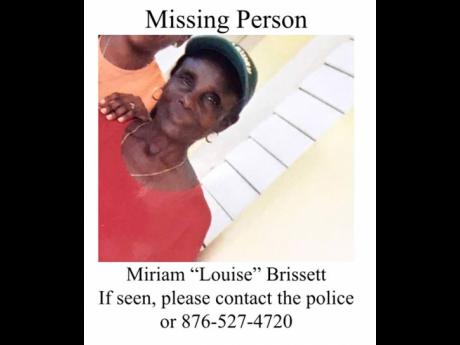 Family members of an elderly St Thomas woman, who has been missing since last February, are maintaining confidence that she will return home safely.

Miriam Brissett, 83 years old at the time of her disappearance , went missing on February 16, 2018.

She failed to return home after visiting a friend in the community of Norris, St Thomas.

Affectionately known as Miss Lou, Brissett was last seen in Cambridge Hill heading towards Bull Bay, St Thomas, by a resident of the community.

At the time of her disappearance, she was living in Phase 3 of Yallahs Scheme with her grandson Kevin Brissett, and son Dalton Brissett.

"This was the very first time she do something like this. I report it same night to the Yallahs police, mi even go TVJ and Love 101 go report it," Dalton told THE STAR.

He said that family members and friends formed a search party which combed the Cambridge Hill area. However, they had no luck in finding her.

Daughter Elaine Rodgers, who lives abroad, was petrified when she received the news that night.

Rodgers, who hadn't seen her mother since October 2018, received information that she was seen by someone in Ramble, St Thomas.

However, the last person to report seeing her said they sighted her on Cambridge Hill, going towards Bull Bay , the opposite direction from her home .

The family observed Brissett's 84th birthday on February 6. They also went through the agony of seeing a Mother's Day going by and having to wonder where she could be.

"Her birthday and Mother's Day were extremely emotional for me and I think all of us to be honest," Rodgers said.

The family is making a heartfelt plea to Jamaicans to look out for her and to contact them if anyone has seen her or knows her whereabouts.

"Not knowing if she is dead or alive is becoming unbearable. If she is somewhere wandering around and someone can identify her, that would be great. If I can put her to rest if she is dead would be somewhat a relief also," Rodgers told THE STAR.

Though it has been more than a year since their mother's disappearance, the family is still hopeful that one day she will return home to them.

"Since I have no conclusion, I still just have to hope and pray that she will come home, honestly," Rodgers said.