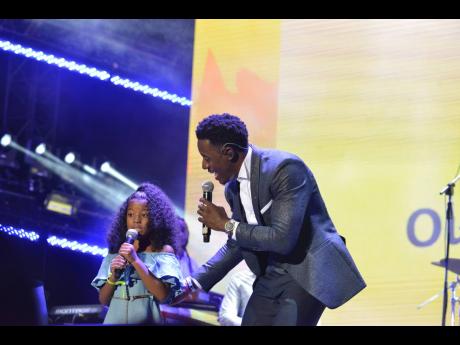 The partnership between Romain Virgo and Tashae was struck after THE STAR published a story in June in which the young singjay expressed a desire to collaborate with the recording artiste. 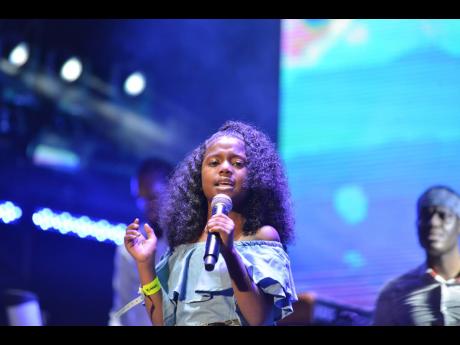 Tashae Silvera is even more popular in her Rae Town, Kingston community since her performance at Sumfest on Saturday night.
1
2

Although overtaken by nerves, young Tashae Silvera and her mother Carlesha Scott trusted in God as the 10-year-old went on to the Sumfest stage to wow thousands of eager patrons.

Tashae's dream has been to perform with her idol, Romain Virgo, and when she was told that he would call her on the Sumfest stage, the youngster could not contain herself.

The two performed their original track, a remix of Dutty Man, which is a Virgo original that Tashae covered earlier this year.

Scott said she had no doubts that her daughter would do well. However, she was afraid that she would not perform to the best of her ability due to nerves.

"It was an experience, especially for her. Me nervous more than she and a never me a go up there but by talking to her before she go on set and praying with her ... As I'm speaking to you about it again, every time somebody ask me bout it, it's like a wow feeling," said Scott.

"I was really afraid that she would probably cry or something like that but I think she went out there and she delivered very well. I see that he (Virgo) appreciated that and the reaction from the crowd and Instagram and Youtube is overwhelming," Scott added.

Lost for words, the 10-year-old could barely describe emotions as one of her favourite artistes invited her on stage and introduced her to local and international patrons.

"I was overwhelmed, I really don't know how to explain it, and my mommy prayed for me before I went on," Tashae said.

Since her return home to Rae Town, central Kingston, the young singjay has had some form of a rise to stardom following her Sumfest performance.

"Is like she famous now, mi nuh think she a guh ever forget this, plus from day one she love the likkle attention so this a big thing fi har," Scott told THE STAR.

The partnership between Virgo and Tashae was struck after THE STAR published a story in June in which the young singjay expressed a desire to collaborate with the recording artiste.

"I wanna make her dream come true. Make the link-up," Virgo posted under the story on THE STAR's Instagram page.

Having linked up with Tashae, Virgo sprang a surprise when he brought her on the Sumfest stage on Saturday night to send a message that child abuse was not acceptable.

"The reception that we got for this song is proof that there is still hope," Virgo posted on Instagram.

Tashae said that "Since I come back home I get a lot of attention from the people in the community".

Her mother, meanwhile, believes that since Tashae's public performance, there will be an increased demand for the official release of the Dutty Man remix.

"They going back to the studio soon to work on the song and as soon as they finish up it will be released. Worse they get that impact and reaction from the crowd at Sumfest, it might affi release sooner," she said.