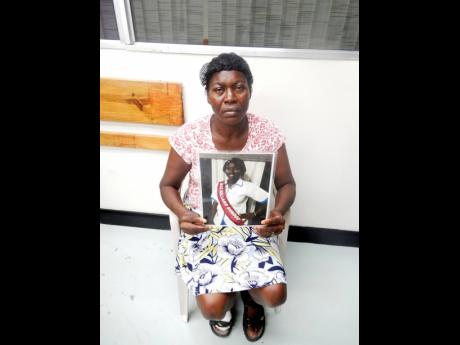 Carlene Bennett-Clarke with a photo of her daughter

A Kingston mother said her life has been in shambles after her teenage daughter disappeared from their home just weeks after spending Mother's Day with her. Carlene Bennett-Clarke broke down in tears as she clutched a pocket diary that she received from her daughter, 17-year-old Mackalia Clarke, as her Mother's Day gift.

With Mackalia's birthday just two weeks away, her mother says she has been finding it increasingly difficult to get through the days.

"From mi daughter missing, mi head mash up. Mi can't eat or sleep. Mi cry every single day. If mi nuh cry in the morning, mi cry at nights. Mi daughter is not the type to just get up and leave mi suh. She disobedient a lot of times but a mi daughter and mi love her bad. See har birthday a come up and mi well waan spend it with her," she said.

Staring at a photograph of Mackalia, Clarke admitted that her daughter was somewhat unruly. The youngster was placed in state care but was sent home earlier this year. She was, however, instructed to report to the Denham Town Police Station on a regular basis. Her mom stated that she stopped going to the station after a while.

Though she has spoken to her daughter a few times since her disappearance, Clarke believes she is now a human trafficking victim.

"She usually call mi from a private number and there is always a man voice in the background. He is always there and it sound like the phone on speaker because sometimes when mi ask her any questions, is him answer or sometimes the calls just cut off. Him claim say dem live a St Elizabeth and she pregnant. Mi tell him say since him is her man and mi well want to see her, why him nuh come by the house come visit. But that nuh happen. Sometime she a talk to mi and the phone just hang up," she said.

The mother of six said she is seeking the public's intervention in getting her daughter home and is pleading with anyone who may know her whereabouts to contact the police.