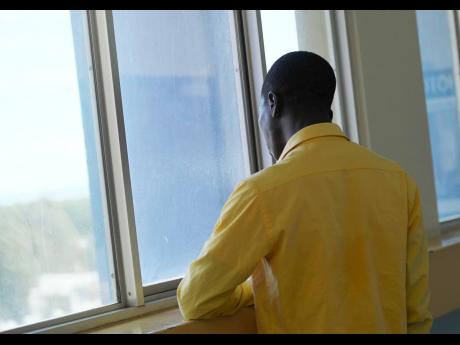 Life has not been a fairy tale for John Kelly*. In addition to sleeping on sidewalks and in abandoned buildings, begging for spare change and left over food, the 20-year-old says he has gotten even more depressed after learning that he is HIV-positive.

Though homeless, he is adamant that he does not want a free pass in life. Instead, he is seeking the public's assistance to get a job.

"I tried to get a work and everything was OK until the man saw the things on my skin. Him start behave a way and say why mi never tell him and him have to go sanitise and vacuum him vehicle. People treat mi like sh*t more time. Mi nuh waan live suh and a beg every day," he told THE STAR.

He stated that he decided to leave his family home three years ago after being constantly verbally and physically abused by some of his relatives.

The only person he said he could rely on was a stranger he met a year ago. The 'Good Samaritan', Winston, who also accompanied him to THE STAR office, told us that he could not turn a blind eye to the situation and his hoping that the youngster will receive the assistance that he is badly in need of.

"I saw him on a beach covered in blood. He told me he had an altercation with a family member, who had beaten him up really badly. I knew I didn't have the accommodation for him at home but I told myself I was going to help him the best way I know how. Sometimes, he would call me whenever he is hungry and I would ensure that his clothes are washed and so on," he said.

Wearing a long-sleeve shirt to cover the rash on his skin, Kelly said it never once crossed his mind that he was carrying the virus when he saw the breakouts on his body.

"I thought it was because I was sleeping on the dirty ground and sometimes my clothes weren't clean. When the blood test came back say mi positive, mi bawl until mi hoarse. Sometimes it stress mi out so much that mi all forget to take mi medication on time sometimes," he said.

Between sighs, he explained that he has no idea who gave him the deadly virus as he has slept with several persons from both sexes.

"I am not gay nor do I have any interest in a man, but mi nah go tell nuh lie, when times get really hard, mi sleep with man too. A lot a dem is some man who drive up and offer to pay for sex. When dem pay mi and mi have likkle change leave, sometimes mi would go by Ripon Road and buy sex from the girls dem so it could be anybody who give mi," he said.

A part of Kelly's short-term goal is to further his education and get certified in mechanical engineering.

"I am fascinated with cars and I know that life does not stop with having HIV. I want to be a man where I am independent and can take care of myself. I hate begging because people look down on me and it is even worse now because I have the HIV rash on my skin. I am so embarrassed at times," he said.

Kelly is not in possession of a cellular phone therefore persons wishing to assist him may contact Winston at 876-804-7045.