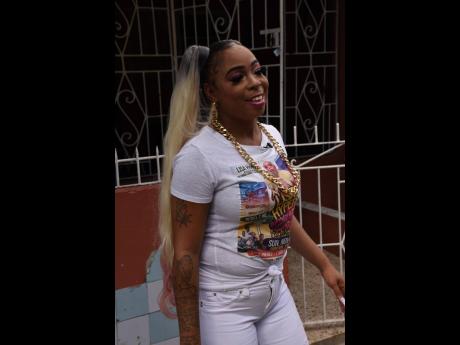 Lisa Hyper says the ‘tough love’ she received in the Gaza, moulded her. 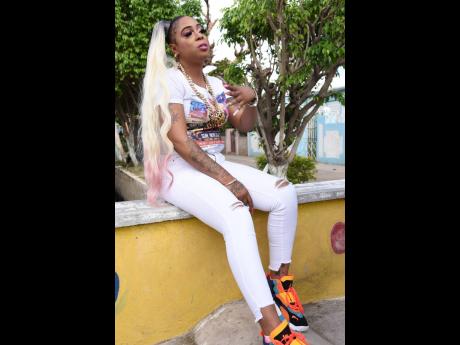 Lisa Hyper reflects on growing up in Waterford. 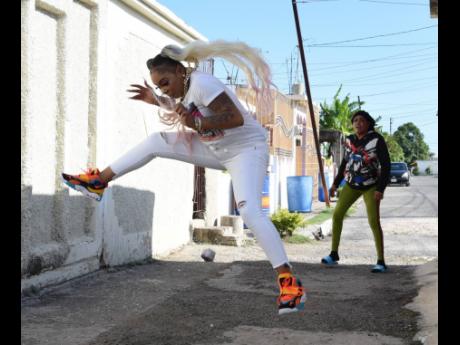 ‘Cock up is 10’! Lisa Hyper shows her agility during a game of dandy shandy. 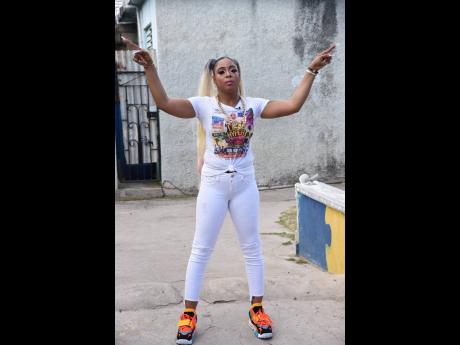 A s the ‘First Lady of Gaza’, Lisa Hyper is a product of one of dancehall’s biggest musical institutions.

Having been moulded by one of the industry’s finest, Vybz Kartel, the deejay told the STAR PAR team that she owes her dedicated approach to music to the ‘tough love’ she received on the Gaza.

“I came to live in 5th phase, Waterford, at the age of five. It was my aunt (her father’s sister) and my five cousins, so yuh know everybody weh deh yah a family. I was very feisty as a child. Dem used to call me ‘Shabba’ because me lip did very long and me did feisty but a yah so make me understand what is tough love,” she said. “It takes a village to grow a child and that was definitely what the Gaza was about, still is about. Right yah so, a Ms Palmer (her aunt) yaad was di HQ a entertainment. The tough lessons I was taught here in Waterford is what really moulded me into becoming who I am today and it’s something I really appreciate. Me couldn’t do music without it.”

On the subject of career choice, Hyper revealed that although her personality was always going to lead her to the entertainment industry, she chose music because of Vybz Kartel’s influence.

“I knew him (Kartel) from the age of five. My family and his family were very close. He is actually a good friend of my cousin so even before him did branch off, the house right in front my auntie house is weh we used to deh every day. Him a sing and we a fling up the chair dem and a make baay noise. I was there seeing him evolve into the biggest deejay inna Jamaica and that transformation was a very big influence on me,” she said. “I have always been entertaining so whether it was going to be dancing, speech and drama or music, I was destined to be an entertainer; but Vybz Kartel made me want this career. The passion he had for the music inspired me on so many levels.”

Recalling the days when the Gaza was fully operational, Hyper described the hip-strip as the place to be.

But with Kartel serving a life sentence, the Gaza today is not as pronounced as it once was. The community was so quiet, that the S TAR PAR team even had difficulty finding the once popular spot.

But with stars such as Black Rhyno, Popcaan, Shawn Storm, Gaza Kim, Gaza Slim and Gaza Sheba having risen from the popular institution, Hyper said the Gaza was and will always be the ‘Mecca of music’.

“Waterford pan di Gaza, 5th phase, was always fun and entertaining. When the Gaza turned up a notch it did just get more popular where everybody wanted to be here and be part of it, but it has always been the place in Portmore to be. Nothing nuh change,” she said. “A baay star come from dem parts yah. Even before he (Kartel) was established, here was the place for entertainment … is a place of positive energy and we still a hold we own and a enjoy we self together as one family.”

Speaking of family, Hyper expressed that despite the negativity that became associated with the Gaza, it never dampened their spirits or broke the bond they built as a unit.

“We have never been the group to really care what people think because at the end of the day dem still a go talk. Gaza is always a place to fight for what we believe in and will continue to do so. We’re about survival and we always turn the negative into positives,” she said. “It is very important for entertainers to not forget where they come from, because at the end of the day, yuh affi have a past to live the future.”