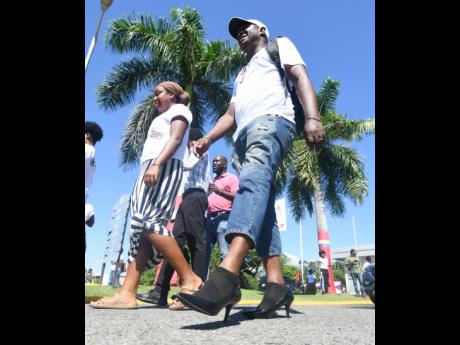 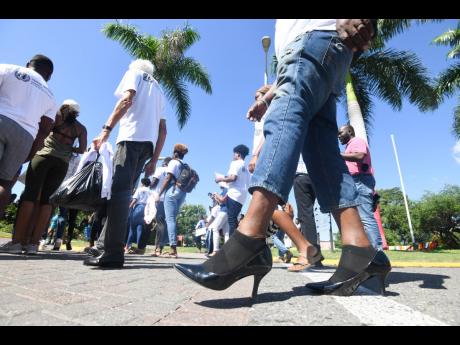 The feet of actor/comedian Glen Campbell in a pair of stilletoes at the Walk a Mile in Her Shoes march yesterday. 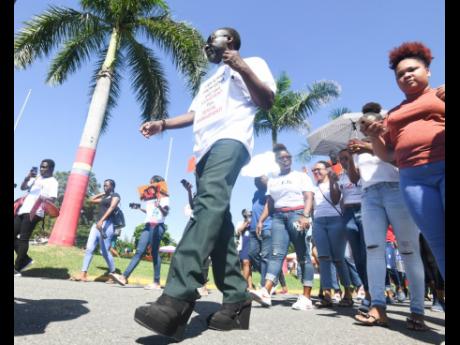 Owen Ellis goes about his business after forcing his feet into a pair of his grand-daughter’s heels. 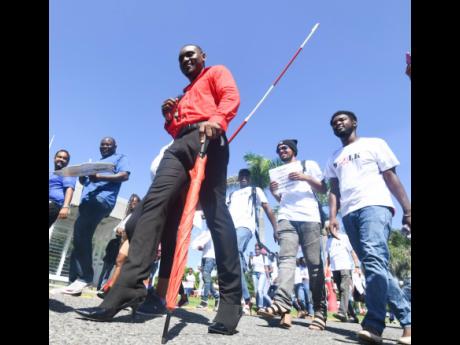 Dwayne Buckle’s feet could not fit in the shoes but he wore them nevertheless. 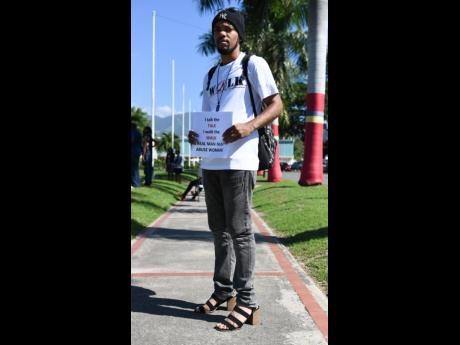 Matthew Anderson at the Walk a Mile in Her Shoes march, which was used call attention to violence against women.
1
2
3
4
5

Yesterday a group of squeezed their hooves into women stilletoes and walked in solidarity against violence against girls and women. The march, which is the first of its kind in Jamaica, which took place at the University of the West Indies, Mona campus.

Among the group of approximately one dozen men who wobbled as they tried to walk in the spike heels was Owen 'Blakka' Ellis.

The comedian and academic forced his feet into a pair of his grand-daughter's heels. Between laughter he stated that walking in the less than three inch heels was very uncomfortable, but his face got serious as he emphasise on the importance of the Walk a Mile in her shoes march.

"The discomfort is also important because we want to make the point to men that that to inhabit the day in the life of a woman is not always comfortable and this is the reality that they live every day. Its not just about the shoes but to walk from one to another for a woman, they will get unwanted attention that is often offensive and unpleasant. What we are doing now is to make the point symbolically that we as men are going t do what it take to get rid of sexual violence," he said.

According to Ellis, he had proposed starting the march in Jamaica last year but this plan unfortunately did not manifest.

"It didn't happen for a number of reasons, and one of them was that a number of men who think that it was a wonderful gesture wouldn't do the walk, and their argument was 'bwoy Blakka, suppose a bunch of gay men hijack it and it turn out into a drag show?' My response was: If you are walking for women to say, 'I got your back, why is your fear of other kind of men walking with you an issue?"

Also making the journey was sports administrator, Dalton Myers, and comedian Glen 'Titus' Campbell. Myers told THE WEEKEND STAR that his intention was to spread the message that violence against woman is a red flag.

"As males, we have a role to play in raising awareness about sexual assault, violence and harassment against women. For us, it is not just about talking but walking a mile in women shoes to show them that we are right there beside them and we believe in survival and we want to send the message across to men worldwide," he said.