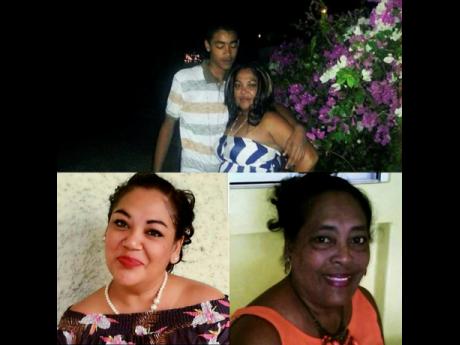 The Portmore residents killed during the home invasion on Sunday night.

Several Portmore residents say they are shocked and saddened after Sunday evening’s gun attack on an elderly resident and two other members of her household in Waterford, St Catherine.

Pamela Russell, 74; her daughter, Shermilla Russell-Craig, 48; and her 21-year old grandson, Romario Craig, were killed by assailants who invaded their home about 9:20 p.m. on Sunday.

“This a one a the roughest time in we life. Dem man ya heartless bad. Dem heartless fi do dis,” a neighbour said as she gazed at the house where the murders took place. “All rum that I don’t usually drink, mi a drink now. It’s hard to accept that something as deadly as this could happen here, and to those good people.”

The slain grandmother was affectionately called ‘Mama’ by community members, who described her as a caring and jovial mother figure.

“She grow everybody in this community. When yuh hear about community mom, is she you a talk about. Every single soul can tell you that this family is a model family in Waterford. Them never argue or is known to have any problems with anyone,” a resident told THE STAR.

The deceased are the grandmother, aunt and cousin of Jamaica Labour Party caretaker of the Waterford division, Krisho Holmes.

Russell-Craig was a teacher at Vaz Preparatory School in Kingston. Principal Karlene Bisnott said she has been with the school for the past three years and was a caring and responsible individual.

“She was a very sociable person and did not contain herself solely to the children she was responsible for. She extended herself and saw to the well-being of the other students,” Bisnott said.

Yesterday, Holmes made a tear-jerking post about the gruesome murders of his relatives, who he said were innocently killed.

“It’s a very painful day for me and my family. My family was murdered innocently. My grandmother, who is a Christian, always encouraged me to pray going out and coming in. My aunt, who is also a Christian, sends me prayers everyday. We have been through so much together to this very final end. My cousin, who needs love, was bitterly and savagely murdered. In it all, man choose to be blind, God saw and he will be God during this time of great pain and hurt and God after,” the post read.

The police said that all three were inside the house when they were pounced upon by armed men.

The police were alerted and they were taken to hospital, where Russell and Craig were pronounced dead, while Russell-Craig died while being treated.

A male resident said that Clandon Road, the section of Waterford in which the murders took place is normally a quiet area.

“This is one avenue that don’t make news negatively. Is 1984 was the last time I remember a man being murdered on this avenue. All of this just shocking bad to me. I remember how ‘Mama’ and her husband used to help everyone get a little work at Christmas time. Her husband was a manager at a store and him used to make sure that nuff people get a job at his store around that time,” the man said.