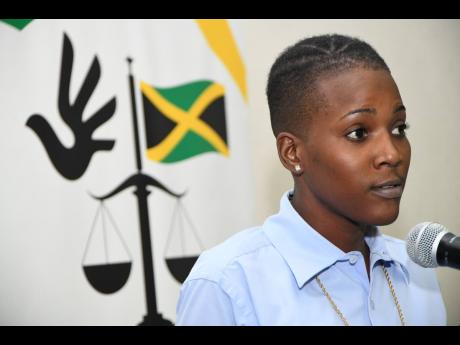 Moya Blackwood speaks to members of the media during the Jamaicans For Justice press briefing on incarcerated children at the Spanish Court Hotel yesterday. 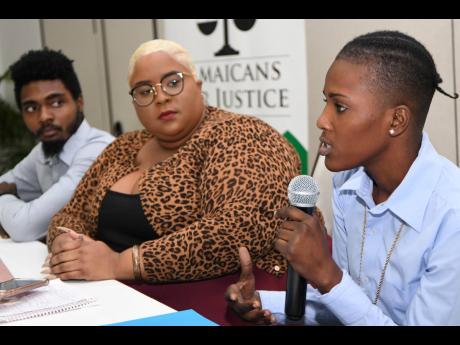 "Being incarcerated di d not make me, instead it break me and almost turned me into a monster."

Those were the words of former ward of the state Moya Blackwood, as she spoke at the Jamaicans for Justice (JFJ) press conference held at the Spanish Court hotel yesterday.

"Being at Armadale let me experience the unthinkable. I was placed on lockdown for two weeks and I had to eat my food with my hands as I was not given utensils. And the food that was served through the grille was always cold," said the 26 year old.

Blackwood, along with members of the JFJ, was there to advocate against a section of the Child Care and Protection Act, which gives the court the power to commit a minor to a correctional centre, whether juvenile or adult, if the minor is deemed uncontrollable.

Blackwood nearly cried as she explained how a small fight saw her spending a portion of her teenage years at the Armadale Juvenile Correctional Centre in 2008.

"I had a fight in front of the Trench Town Police Station, and a policeman came out and grab after me and I ran off. He began to run mi down and while doing that, his firearm fell from his waist and persons began laughing at him. Is like him decide say him nah make mi get way, so him come for me the following morning," she said.

She stated that although no adult was present at home when the police entered the dwelling, she was still taken to the station.

She was later slapped with four charges, including disorderly conduct and resisting arrest. That same afternoon she was sent to the Glenhope Place of Safety.

"My mother was a security guard at the time so the police didn't get her phone when they called. I tried to explain myself to the police and I wasn't questioned in front of an attorney or anything. I was just sent to the home. I was brought before the court three days later and the judge told me to apologise to the police officer. But I refused because I did not do him any wrong," she said.

Blackwood said she was sent back to Glenhope where she spent a few months and upon returning to court, she was given a two-year correctional order, to be served at Armadale.

Rodje Malcolm, executive director of JFJ, again raised concerns that the practice of locking children away in correctional facilities or remand centres for displaying behavioural problems, despite them not committing a crime, is a breach of their human rights.

He stated that children and their parents are often told by court staff that they will be going to 'a better place', only to realise that they have been committed to prison-like conditions despite not breaching the law.

Six years ago, the then political administration made a solemn promise to amend the Child Care and Protection Act to bar a magistrate from deeming a child uncontrollable and locking them away for years in the corrections system.