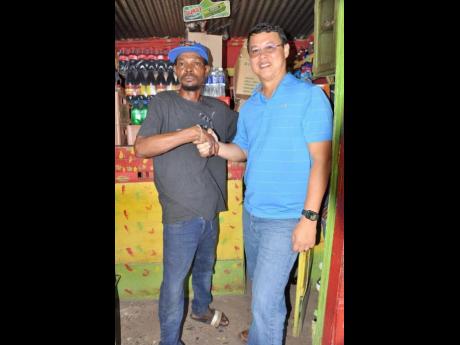 Rohan Elison (left) thanks Garth Young, operator of Young’s Pharmacy in May Pen, Clarendon. Young was one of the sponsors who assited Elison with restocking hs shop. 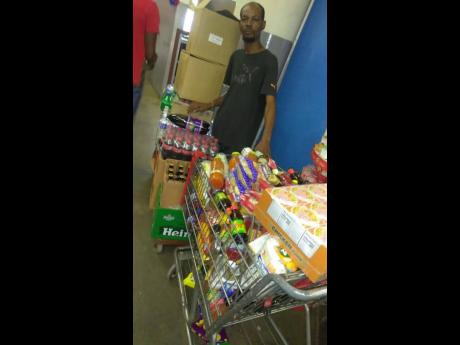 Rohan Elison is grateful for his goods.
1
2

He is called 'Mr Faithful' by persons in his community and upon hearing Rohan Elison's story, one will easily understand why.

The 47-year-old, who hails from the tough community of Effortville in Clarendon, is known for his kindness.

"A lot of times mi mash up mi money just to help out people. It's like a can't say 'no'. Mi get a little partner draw the other day and buy little stuff for the place, but when some people dem come and start ask mi for help, I had to just give them because mi know how dem yard set up so mi know anno lie dem a tell. Mi can't go to bed and sleep comfortable at nights knowing say mi could a help a man and nuh do it," Elison said.

The shopkeeper has been operating in his community for the past 15 years .

"Several years ago, a man was killed in my shop during gang war, and people even told me to go open shop in another area where it was calm. A lot of other business owners locked up because the avenue got shot up countless times. I never closed my doors because I had mouths to feed and I know that if the shop lock, the place is going to be like a ghost town, and I don't believe in going into someone else's community and developing it while mine suffers," he said.

Having made the decision to stay, Elison found himself in a situation where his business was no longer viable. He was giving out a lot of his stock on credit, and in some instances he did not even bother to collect.

That was when charity organisation, James and Friends Education Programme, stepped in, helping him to restock his shop.

"I know Mr James was always helping people but I also know that my role was to help people as well, so I never wanted to ask for help and someone else needs it. But all this time, the foundation was watching me and see how I deal with people, and see mi rise and fall and stepped in to help and I am very much grateful," he said.

He also continues to lobby for unity in his Clarendon community that is too often rocked and blanketed by murders.

"I remember when every day in Effortville felt like Christmas and I know that there are a lot of good people here. In recent times, I have seen a decrease in violence, especially since the SOE has been here, and mi feel really good. However, I want the persons here to know that we can all maintain the peace and don't depend on the lawmakers to do it. With the police presence being here, everybody get a chance to look into themselves and know what's wrong from right," Elison said.