Woman lives with mother and stepmother 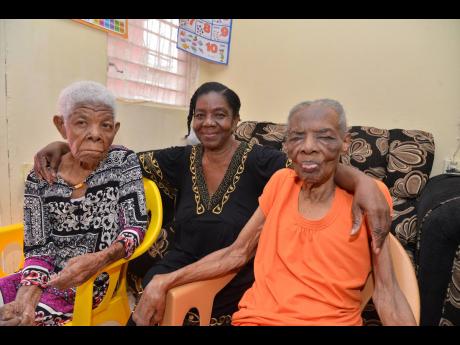 It is quite uncommon in Jamaica for a mother and stepmother to live under the same roof. However, this is the case with Alberta McLeod-Young, 88, and Hyacinth Wallace, 81, who are both cared for by Beverly Young, Wallace's daughter.

"It is hard at times because they both wear diapers and are unable to do anything for themselves, but my children and grandchildren assist me," Young told THE WEEKEND STAR.

Young said that she has lived with her step-mother since she was age seven, after her birth mother, Wallace, took her to live with her father decades ago.

"My mother, Hyacinth, gave birth to me, but this lady has raised me as her own from I was seven years old. She taught me everything and she never once let me feel unloved. One time I went overseas and I when I came back, my father was sick, and I know I had to take care of my stepmother because she was all that I had," she said.

She lovingly rubs her stepmother's back and neck as she further explained how much of a backbone she has been in her life.

"When I had my four kids, she was the one who helped me with them, and I remember an incident where my father got so upset with me and told me that I had to leave the house; and she told him that if I was leaving, she would be leaving, too. These are some of the reasons why I know that I couldn't leave her, especially after my father died. She don't have any children of her own and she take me in as hers. I will never be ungrateful, ever," Young said as her eyes welled up with tears.

Despite the great relationship with her stepmother, Young made sure her mother was part of her life. She recalled taking her children to visit her when they were babies. However, there came a time when Young lost contact with her again. It took years before they were reunited.

"A since mi get big mi find mi madda, because it look like she was all over the place because she used to work. When she get older, she start suffering from dementia, so she used to stray away from home. I was searching for her, and sometimes people would tell mi say dem see her. One day mi get up and say mi nah go church and mi a go walk and look for her," she said.

"When mi reach Hunts Bay, mi ask the police dem if dem see a little oman fava mi and dem say no, but a taxi man say him see her. And yuh know say him drive and go look for her and carry her back? When mi see mi madda, mi burst out inna tears because she dirty and stink, and mi beg the driver carry us home," Young recalled.

The unity was short-lived as a relative soon came for Wallace.

"Mi have her and one a mi relative come take her while mi at work and carry her go Manchester and dem treat her bad; and mi go Manchester on day and mi all lost down there, but mi never stop til mi find her and carry her back. When mi carry her back, her toenails long like the man in the Bible and she pale bad. And mi beg mi stepmother make she stay with us and she say yes, and from that day until now I keep her," she said.

The elderly women were last week visited by a police officers, led by woman constable Michelle Marsh from the Denham Town station, who took along packages that included diapers and vitamins. Marsh said that the items were supposed to be given to one elderly person in the selected household, but after hearing the women's story, she was compelled to bend the rule a bit.