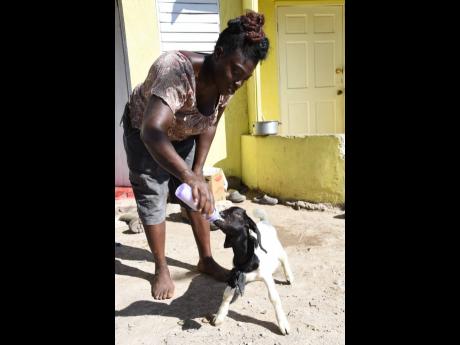 Upon hearing her name, Sarah eagerly ran to her 'mother', Alvarine Bramwell, and gulped down a bottle of warm Lactogen baby formula.

She followed that up with a big drink of water. A few minutes later, she fell asleep in the shade of a tree in Bramwell's Old Harbour, St Catherine yard.

Bramwell then turns her attention to Sarah's sister Destiny. She, too, is fed.

Sarah and Destiny are not humans. They are two goat kids owned by Bramwell, a 32-year-old farmer. She said that the kids' mother was stolen little more than a week after they were born, so she took up the task of ensuring that they get proper nutrition.

Bramwell said that it was hard to get them to drink from the bottle in the initial stages because they were "accustomed to their mother's nipple".

Relating her experience with Sarah, she said: "I had to let her suck on my finger first then I draw it out and put the (bottle) nipple."

"Sarah is a very smart kid. In fact, she acts like she is a human. She always ah follow me through the house, and she know when it is time for her feeding and she knows her name," she added.

She described farming as her first love, and she dedicates much of her time to it. She has 29 goats and eight pigs, all of which she cares for before going to her day job.

"I have been doing this from I was a child because my mother was a farmer as well. I even have a few certificates in agriculture. A lot of person don't know that I am a farmer because I don't invite everyone at my yard. People know that I do housekeeping, though. My days are very busy because I have my son to take care of. His father used to help me, but he passed away in September, so it is me alone now," she said.

Bramwell has dreams of extending her farm, but she is gravely concerned about the high incidence of praedial larceny in her community.

"I would want to add other animals like cows, but too much tief deh bout. It's a good thing I have dogs or else they would tief more than just the one. Even the other day, a man came and park up in a van a watch out the place. Some people don't care how hard you will have to work to get your things, they will still tief it," she said.

The thieves, however, will not deter her from continuing her work to ensure that her farm remains viable. And as for Sarah and Destiny, Bramwell has no plans to part with them.

"I never sell the she goats, but I keep them so they can make babies," she said.