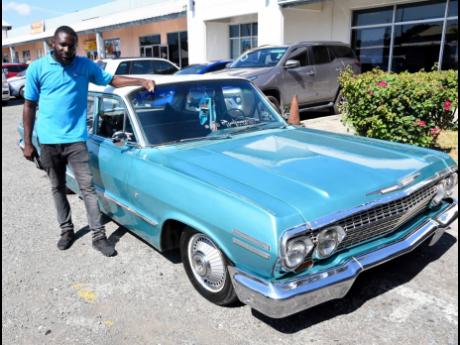 Glenford Thorpe with his 1963 Chevrolet Impala.

Last week, several persons could be seen taking pictures of a Chevrolet Impala at a shopping centre in Spanish Town.

The owner of the vintage car was nowhere to be found but that did not prevent the curious onlookers from touching and peeking inside the car.

Persons guessed the age of the car's owner, stating that it was most likely a male in his late 70s or early 80s.

However, when Glenford Thorpe inserted the keys into the door, he left many wide-eyed.

"No sah a whe dis a likkle bwoy ya a do with da ancient ride ya?" a woman was overheard saying to herself.

At just 32, Thorpe says he is attached to his 1963 Impala. The owner/operator of GT Auto Market on Mountain View Avenue said he has always been fascinated with vehicles that are twice his age or older.

"I have been into vintage from childhood days and I was also fascinated with movies that these cars were in. I would do research on these vehicles and just told myself that I would own one of them when I could afford it," he said.

In-between chatting to a few of his vehicle's admirers, he stated that he has grown accustomed to the fanfare.

"People's heads are always turning when I am driving and I have got lots of reactions from other road users. People always want to know where I buy it and if I am selling it back," Thorpe said.

He said that his vehicle is not as expensive to maintain as some may think, adding that once it is serviced regularly, it gives very few problems.

"It has an original engine and transmission, in fact everything is original in it. I drive it once or twice a week and it takes me anywhere in the island. It can be a daily drive but I want to preserve the miles on it," he said.

Thorpe's first vintage vehicle was from the 1980s, but he recently upgraded to the Chevrolet and even looks towards purchasing a vehicle that is nearly triple his age.

"This is not my first classic car but it is the first one from the 1960s. I am looking towards purchasing one from the 1950s ... I already have my eyes on one but it is going to take a lot of work now so that is on hold right now," he said.