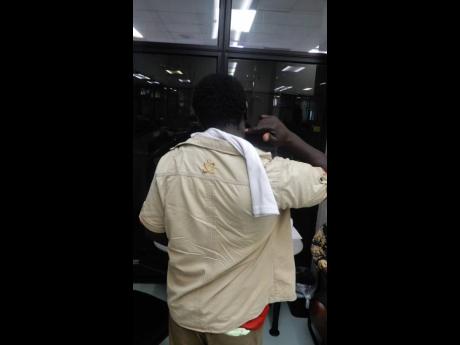 Ian shows where one of the bullets struck him in the early minutes of New Year’s Day.

Ian, the man who was allegedly shot by the police early January 1 after he wielded a machete at them, is apologising to the parents of the child who he used as a human shield during the encounter.

The 38-year-old juice and snack vendor said he had no intention of hurting the child and regrets putting her life in danger.

"Mi really sorry about it. If mi did have money, mi would do anything for her because she save mi life. I am a father of four and I am really sorry for the distress that I may have caused her parents. I am so sorry," he said.

A video circulating on the Internet saw the wounded man lying in the road with a large crowd gathered around him.

Shortly after, he was whisked away in the back of a police vehicle. Ian was shot three times in the neck, but police have denied pulling the trigger.

The Corporate Communications Unit said that he was shot by a security guard following a confrontation. The Kingston Central Criminal Investigations Branch continues to investigate.

Yesterday, Ian dismissed rumours that he was a 'mad man', stating that he was just trying to earn an extra dollar when he tried to enter the waterfront area in downtown Kingston minutes after the fireworks show ended.

He stated that he was barred from doing so by a policeman but decided to push his way in after he saw lawmen allow two other cart vendors to enter the venue.

"The police start lick mi wid a baton on mi hand and kick and cut the cart rope. When him do that mi still determine say mi wah go in and him pepperspray mi and mi daughter eye. Mi get upset and mi take up the machete that was on mi cart and mi hol' it inna mi hand to move on, but by time mi fi do that, dem (police) point the gun on mi," he said. "Mi just get crazy when mi see mi daughter a roll a grung and a cry. Is like mi lose mi mind. Mi see a little girl a run pass and tru mi never want dem shoot mi in mi chest, suh mi just hold har as a shield."

Ian said he was later transported to the Kingston Public Hospital by the police but did not think he would survive.

"Mi keep on a ask if mi dead ... even in the van mi a ask if mi a go dead. Dem time deh mi a bleed a go way and one of the police was using something to support mi neck. New Year's Day and mi swear mi dead," he said.

He was released from hospital last Saturday and no charges have been laid against him.

He stated that he has been pushing his cart in downtown Kingston for more than two decades and never once thought he would have to endure such an ordeal.

"An angry spirit came over mi and now mi a tell myself say mi should have handled things differently," he said. "Mi just love mi baby and she say she wah be a doctor and mi a go help her achieve her dream."