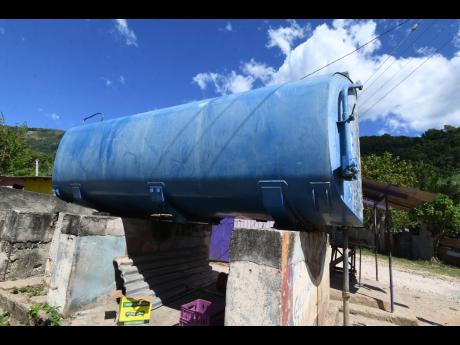 Ricardo Makyn/Chief Photo Editor This tank holds the community’s water when the trucks are able to bring the precious commodity. 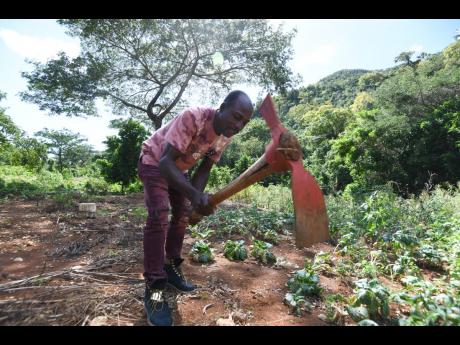 Morris Clarke said that many of his crops have dried up due to a lack of water. 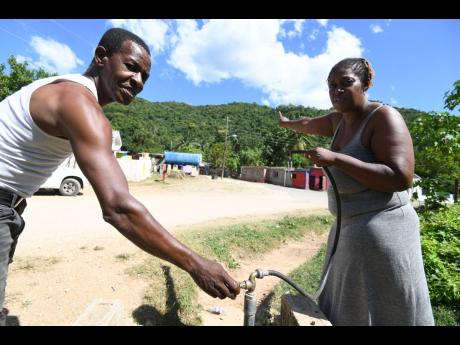 Wilburn Forbes and Susan Morgan show a pipe which gets water from the tank beside the community centre.
1
2
3

The residents of Glade in St Catherine are some of the warmest persons one will ever meet.

With not much to do for entertainment, many persons will gather in the square and wait and chit-chat while Susan Morgan prepares lunch and breakfast for sale.

Although they are less than a mile away from the war-prone Caymanas Bay community, they are a tight-knit unit. But their biggest issue is the lack of water in their small community.

"We hardly get water in these pipes and when it come, it's a chaos in this place because all fight bruk. Is 16 years mi live here and the situation has been like this forever. We don't have pipelines that run to our home and we would really like to see that change. We have a nice community, where nuh war nah gwan round here or anything but mi would want some water, man," she said.

Morgan however, has high praises for the community's Member of Parliament (for St Catherine East) Denise Daley, and councillor (Lauriston division) Keisha Lewis, who she described as dedicated and committed.

"They really try, and they would often send water trucks to the area, but from the other day the truck broke down, so is just one truck coming in to sell water. While mi can afford to pay $400 for a drum of water, the old people them who nah work can't do it," she said.

So bad is the water crisis that Morris Clarke has no other choice except to count his losses as the drought had affected his crops of sorrel, pak choi, okra, sweet pepper and other provisions.

"All a mi crop dem just dry up because mi nuh have nuh water source to supply dem. Mi just have to watch it a go dung and can't do anything about it. Mi lose about $30,000, and if mi fi consider how much mi would make if mi should consider the selling price, it would have been about $70,000, and that is just pak choi alone," he said.

According to Clarke, he has the customers to purchase his provisions, but said that he has not been able to sell much recently because his crop has not come to maturity.

"Is just the water is the problem, not the market. Mi raise even chickens too, and it take 60 drums of water to keep 300 chickens alive until they are ready to be killed, so one can do the calculation. Even the cowpeas that I try with dry up. Right now, people are racing to buy local food because it is unprocessed. But with the water issue that a gwan here so, mi can barely offer any services to them," he said.