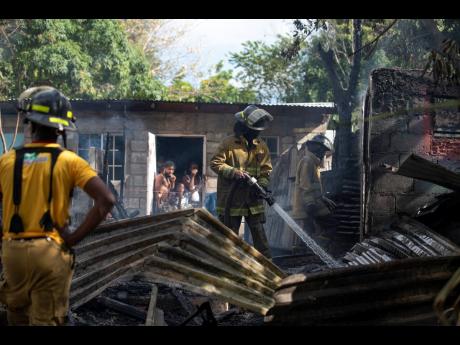 Firefighters perform cooling-down operation after in Vietnam, an area located off Grants Pen Drive in St Anrdew, where three houses were destroyed yesterday. 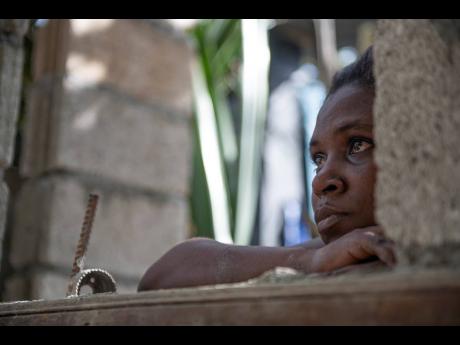 Tashorna Deslandes’s one-year-old son was rescued from one of the burning houses.
1
2

A fire ravaged three houses, leaving seven people homeless in Vietnam off Grants Pen Drive in St Andrew yesterday. The fire reportedly started some time after 3 p.m., spreading from house to house, and trapping a one-year-old baby boy inside on the dwellings.

"Me hear me stepsister a shout, 'bring a bucket a water', and me run come out and see the fire a blaze. Me son did inside a sleep,," she said.

The frantic mother wasn't able to run back to the house due to the heat of the raging fire.

"When me feel the heat, me couldn't do nothing else more than just call me friend and tell him fi pass me son. Him go for him and me just take him and come out of the yard," she said.

A year ago, two-year-old twin girls, Nahelia and Nahalia Pinnock, perished in a fire in an area of Grants Pen called Belgium.

Deslandes knows very well that her son should have suffered a similar fate. With her son rescued from the burning house, she rushed out of the yard to get her boy away from the smoke. She didn't manage to grab anything.

She stood outside with her neighbours and watched helplessly as firefighters penetrated the remaining structures with water. All the roofs had collapsed.

Omar DaCosta, 29, is a passer-by who saw the fire and decided to pitch in. "Me jump the fence and a help the yute dem weh a throw water, but in less than three minutes, everywhere was on fire. Me put down me bag and dem things deh, so me lose all me shirt and me shoes," he told THE STAR.

Deslandes, meanwhile, is pondering her next move, having lost all her belongings in the fire.

"A just two months me move in yah. Yuh see how hot that is! I'm supposed to go a work tomorrow morning, because I don't have a work or anything. Me nuh save nothing at all."

Calvin Walker, 58, lives in the same yard as Deslandes. He, too, lost everything in the fire. "My two daughters were inside the yard. Me just glad say no life nuh lost. When me come me couldn't even go in ... everything bun up in deh and gone. Me just affi gwane live ... Me nuh know wah a guh gwaan," he said in despair.