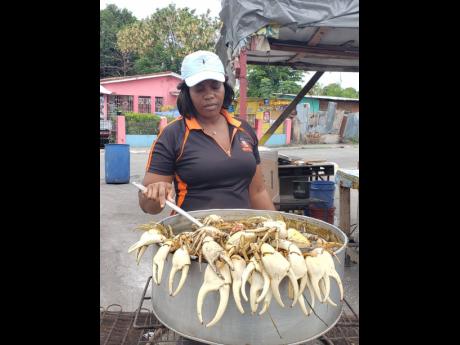 Munchie, one of the crab vendors at Heroes Circle in Kingston. 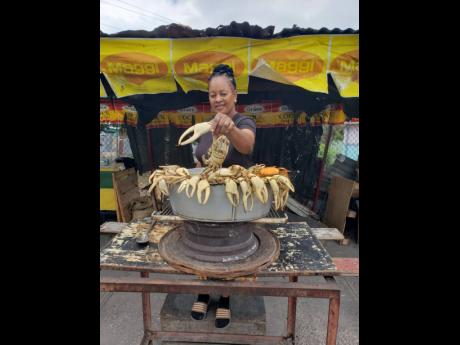 Kay Stewart said that this is probably the slowest her business has ever been.
1
2

Crab, corn and soup vendors who operate along National Heroes Circle are feeling the pinch from COVID-19 as their sales have drastically decreased since the deadly virus hit local shores.

When THE STAR visited them on Tuesday, there were dozens of boiled and roast corns, pots of untouched soup, and a wide display of crabs; but no buyers in sight.

Like the other vendors present, Kay Stewart said that this is probably the slowest her business has ever been.

"See is almost midday now and is just three corn mi sell from morning. Normally mi would sell dozens already. The same thing with crab, is just two mi sell. Nutten nah gwan fi us out here at all. This corona ting a kill out the economy. A lot of people nah go work again, so dem a cook at them house, and then again, everyone have to be saving dem likkle money to buy food," she said.

At a press conference on Monday, Dr Jacquiline Bisasor-McKenzie, Jamaica's chief medical officer, said that Jamaicans have been placed on notice to expect a spike in the number of people testing positive for the COVID-19 in short order.

Stewart said that the sale decrease has been causing her bills to pile up, and she looks forward to the day when the dreaded coronavirus would have run its course.

"Mi have all mi partner and other bills to pay and mi don't know how mi going to do it. Right now, all Courts mi owe and mi did beg them to give me some time last week. But it look like mi have to go back down there go beg dem likkle more time again because mi did a hope mi sell enough can pay dem, but nutten nah gwan," Stewart said.

Up to Tuesday night, 25 persons had tested positive for COVID-19. Since the pandemic, government officials ordered that non-essential personnel should work from home.

Another vendor, who identified herself as Munchie, said this may be responsible for the low sales.

"Last week, mi and a few other vendors never come out and say we staying in, but mi think this week would be better, but that's not the case. If you notice, some a the stalls dem empty because some a the people dem nuh come out. Normally dem time here, car a line up, but a lot of people a work from home or a stay in," she said.