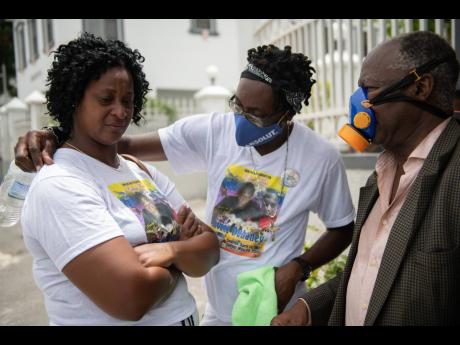 Yanike Crosdale (left), mother of the late Jevaughn Duhaney, is consoled by Leon Duncan (centre) as they wait for Duhaney’s autopsy to be done at the House of Tranquillity Funeral Home in Kingston yesterday. Looking on is Dr Jephthah Ford.

Yanike Crosdale, the mother of Jevaughn Duhaney, who was fatally shot, reportedly by a soldier last month, wept openly outside the House of Tranquillity Funeral home yesterday.

She was frustrated as the scheduled autopsy was stalled, allegedly because the forensic pathologist, Dr Althea Neblett, refused to have Dr Jephthah Ford oversee the procedure on the family's behalf.

"Why can't Dr Ford be there? The doctor came out and say she not working with Dr Ford and if he was the person who is going to oversee it, then the autopsy nah go do," she said.

Duhaney, 24, a resident of Bray Street along Elletson Road in Kingston, was reportedly shot by a member of the Jamaica Defence Force on May 9 as he sat on his verandah.

Ford said that the family had followed procedure and wrote to the relevant authorities to inform them that he would be present.

"The family thought it is important to have another doctor present during the autopsy and that is why I am here. I came and went inside and she (Neblett) came and say 'Mi nah work wid yuh, enuh'," he said. "I want to know the position of the shooter and how he (Duhaney) was shot. At autopsy, the body speaks to you and I want it to speak to me so I can speak to his mother."

Crosdale burst into tears before explaining how difficult it has been to accept her son's death.

"He was my heart, my soul and my everything. If mi head hurt mi, mi call him before mi even call mi babyfather. Life is a mess. All the time mi see people a bawl pon TV and mi use to say mi feel it, but now mi can tell unu whe it really feel like and it nuh nice," she said.

THE STAR has not been able to confirm whether Dr Neblett refused to work with Dr Ford. THE STAR also tried to contact Judith Henry-Mowatt, executive director of the Institute of Forensic and Legal Medicine, without success.