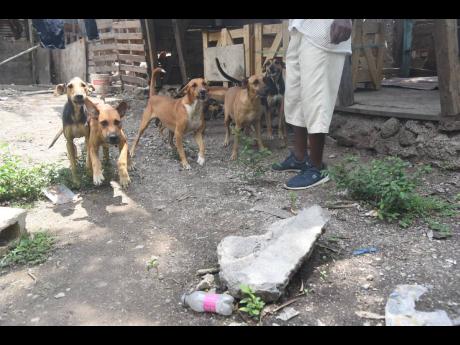 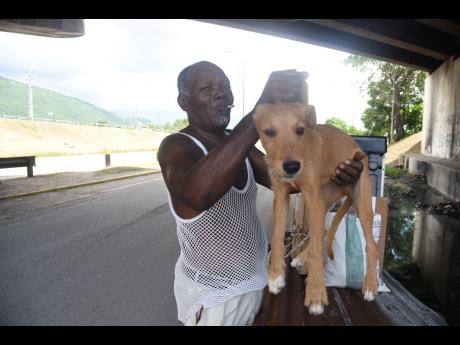 As Neville McLeod parked his handcart under a bridge at Six Miles in St Andrew, one couldn't help but notice a huge box that sits beside an old bus stop and a few sheets of zincs.

Inside the box is one of the 70-year-old's most prized possessions, a mongrel dog.

McLeod, a pig farmer, shares his Riverton home with eight other mongrels. He said he has been providing a home for stray dogs for more than four decades.

"Whole heap a dem pass through mi hands. Some of them dead and I will give away some as well. A lot of times I see them on the road injured and I carry them home and nurse them back to dem good health. Is not all the time mi like give dem away because some people nuh like animals. Mi see a man beat a dog to death already and it pain mi heart," he said.

He stated that his latest four-legged friend belonged to another family in a neighbouring community who was relocating and had no interest in carrying the animal.

"I am suppose to collect a next one later today. Sometimes people ask mi why mi have dis whole heap a dog in a mi yard but dem nuh understand say mi love dem. Look, da likkle one ya nice and pretty. Mi can't make dem suffer. More time when all one a dem escape and make car lick dem dung, mi feel it bad. Mi nuh like see nothing do dem but sometimes people all poison dem and kill off some because dem just wicked and nuh understand say dem have feelings," he said.

As McLeod and his family invited the news team inside the yard, the dogs were not so welcoming and barked ferociously. But they were soon controlled by their master.

They all lay close by with eyes focused on the 'strangers'. McLeod said although the animals are cuddly, they are also very 'bringle', so he has to ensure that their zinc gates are always shut tight. He stated that in the past he would normally let the mongrels out to roam a bit but not the current bunch.

"Dem one here will rush people and if mi nuh mind sharp dem dem get mi in a trouble. If dem ever see all anyone walk in a di yard with all a pullover, dem get crazy. A lot of times people a walk pass the gate and dem armed up with bare big stones and sticks because them fraid, but we always keep the gate lock," he said.

McLeod said that as things are slow economically because of COVID-19, he gives the dogs some of the pigs' feeding.

"But when tings right, mi treat dem man, because dem like delicious tings whe we humans like. So sometimes mi stop over di KFC and buy them some chicken when mi have money. Not because they are mongrel dog dem nuh cheap at all, because mi have to worm dem out and make sure dem alright because dem will get sick. Some a dem kinda magwa dung now but a because mi nuh have nuh money right now, but dem soon alright again," the dog lover said.