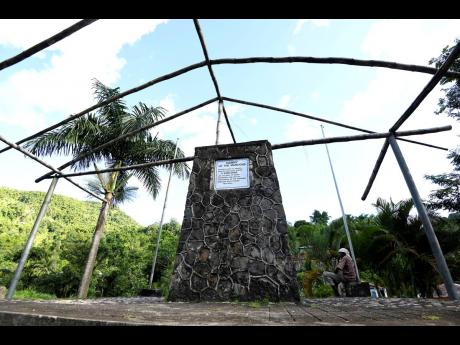 A Maroon man sits by the monument of Nanny of the Maroons in Moore Town, Portland. 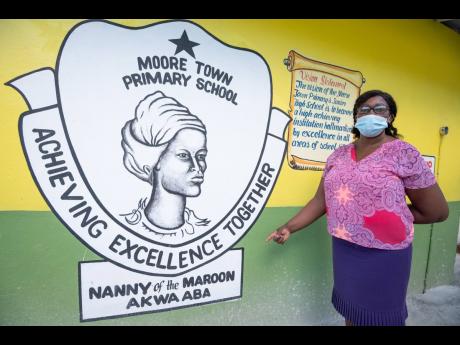 Kathleen Wright, principal of Moore Town Primary School, speaks about the Maroon phrase which is featured in the school’s crest.
1
2

'Akwa Aba' is inscribed in the lower middle section of Moore Town Primary School's crest. Principal of the institution, Kathleen Wright, says it is the Maroon's word for welcome.

The world, which has its origin Ghana, was among many that was common in the Maroon's everyday life. These days, it is mostly used by the older folks. However, the Moore Town Maroons are making provisions to change that and have the language taught in their schools.

"We are trying to revive it now because it is really dying out. We have a group of young persons who are going more in depth with, and do research about, it," said Wright. "Checks are being made with those in Ghana to have more solid information and context about the words."

Wright, who is also a Moore Town Maroon, said that since taking up her role as principal in 2005, she has ensured other aspects of their tradition are being taught.

"We try to pass on the Maroon culture to the students, so they are taught the traditional drumming and dancing as a part of our extra curricular activities," she said. "Each year, we have celebrations and older Maroons would come in from Scott's Hall and Accompong, so the children would get a chance to learn and see how exactly traditional things are done."

Moore Town , nestled in the hills of Portland between the Blue and John Crow mountains, is approximately an hour's drive form the parish's capital, Port Antonio. It was settled by Nanny and other Maroons. The quite, rural community boasts modern, concrete houses and has access to amenities and services such as electricity and Internet service. However, while residents have embraced 21st-century lifestyles, the community's elders have ensured that there is cultural retention.

Colonel Wallace Sterling of Moore Town says they are doing their best to maintain the heritage.

"We teach the young people the dancing and drumming, because they are the ones who will have carry it on. We want the young people to learn the language, too. We got someone out of Africa to come and speak with them, but that is the best we can do now because the person has to go back," he said.

Lincoln Knight, a fellow Moore Town Maroon, said that the dialect his one way of identifying his natives.

"When me go around somebody, me can know if them a Maroon when me hear them talk if them 'chamo chamo', which means 'talk some and left some'," said Knight. "We want the kids them learn the language because when the older one pass and gone, it can go on."