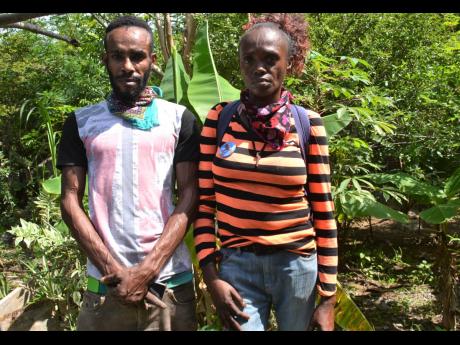 Frederick Johnson and Marcia Morgan say they don’t know how to recoup their losses.

Standing in a sea of mud inside her Llandewey, St Thomas, home, the tears streamed down Marcia Morgan's face as she spoke about her present living conditions.

Her partner, Frederick Johnson, placed his arms around her, which seemed to offer a bit of comfort as she explained how they had lost their farm and other assets when the Yallahs River overflowed its banks and paid them and their neighbours an unwelcome visit.

"Mi panic when mi see the water a come in. Mi think we did a go drown. We start bawl out for help and one a we neighbour come help we. Mi husband had to lift mi up to carry mi thru the wata," she said. The high watermarks on the outside of their one-room board dwelling tell the horrific tale of what transpired as heavy rains battered their community and the wider island. Their backyard farm that was loaded with sorrel, cabbage and other produce, was completely destroyed. The crops, along with a 1995 Toyota Corolla, were their only assets. Now the couple says they are penniless. Morgan is long overdue for a heart surgery but that seems farfetched.

Johnson said it took him little more than two years to save $130,000 to purchase the vehicle last year October. The car had remained unregistered, and the couple was looking forward to using the money made from their crops to get the necessary documents. Unfortunately, that dream was drowned with Sunday's rainfall

"Mi plan say mi a go use the car to drive round and sell the sorrel and tings. Afterwards, mi would a sell it back and use the money to pay fi mi wife heart surgery because mi nah go survive if she dead. But now the crop dem gone and the car mash," he said. "A nuff time we go bed hungry or just eat dry bread to save this money and to see water just take it way like this hurt we bad."

The couple's complaints were just one of many in the Llandewey community. Extremely bad roads and massive landslides were also observed. For the residents, one of their greatest fears is that another shower of rain could easily leave them marooned.

"It's not the first or the second time water come in but it a get worse now. The rain nuh done yet and if we no get help, we a go cut off from everybody. We no fear corona like how we fear the river ya now," an elderly man said.