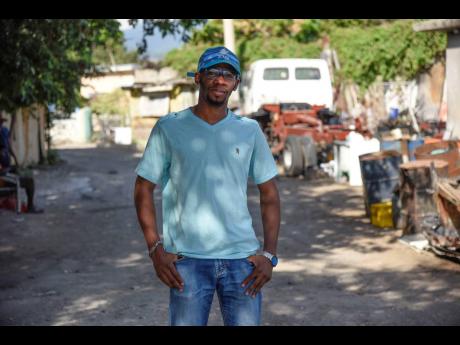 Malcolm Martin is determined to help improve the lives of the residents of Frog City, through his foundation, Gen Uprising.

When Malcolm Martin visited Frog City in Maxfield Park on Monday, a group of teenage boys gathered around him, several of whom saluted by bumping his fist.

Martin saw himself in the eyes of the boys. Not so long ago, he lived in the community and endured much of the struggles they now face.

The 24-year-old Jamaica College past student says he is now there as a mentor and tutor to some of the youths, through a foundation called Gens Uprising, which was started in October. He said the motivation to start the foundation came from a conversation that he had with three young men in the community.

"I asked them where they saw their lives in five years, and based on their responses, I saw the need for positive mentorship for the lost and misguided young men," he said.

"Sixty of the youths that live here registered. We have persons, including teachers, who come on the programme to assist, and we give them a stipend, which is not enough for the work that they are putting in. Currently, we are seeking sponsorship for back-to-school supplies. We are putting in a lot of work and making a lot of sacrifice," Martin said.

He stated that the meaning behind the foundation name lies heavily on their motto - GENESIS, which stands for encourage, nourish, equip and support individuals for society. In addition to Martin, the Gens Foundation executive comprises of Tevin Ashman, Shemar Millwood, Kristan Russell, Carvel Coombs and Howard Bingham.

He said he is hoping his mentorship programme will assist in breaking the cycle of poverty and help guide youngsters who live in Frog City.

"I grew up in a marital home, and growing up here, I would have seen and experienced a lot of things. People usually give back, but that was whenever election was coming around," he said.

The Kingston 5 community is one that cries out for attention. The dirt roads, zinc fences and broken down houses, with outside kitchens and toilets, is a telltale sign of a community in dire need of transformation.

Martin said that life was tough for him when he was growing up in the inner-city community. He recalls being among the first in line to collect his nutri bun and milk while he was a student at Rousseau Primary School, which is located a short distance away on Ricketts Avenue.

Martin said that he got between $30 and $50 for lunch money, and this was not sufficient to buy cook lunch at school. He said that his parents worked tirelessly to support their family. However, providing for seven children was quite a task. Martin said that while his life was filled with struggles while growing up in Frog City, education proved to be his way out.

"I somewhat took opportunity of the 'rich friends' in high an even primary school because I would do their assignments and get paid. I was an A student, so that would be like a kind of income for me," he said.

Having received good scores in his Grade Six Achievement Test, the examination once used to place students in high school, Martin earned a place at JC. While there he was a student council representative from first form, right up to sixth form. He left JC with eight Caribbean Secondary Education Certificate and four Caribbean Advanced Proficiency Examination subjects.

He currently works as a proof operations officer at Jamaica National Bank and is a management studies student at The University of the West Indies.