No school since March 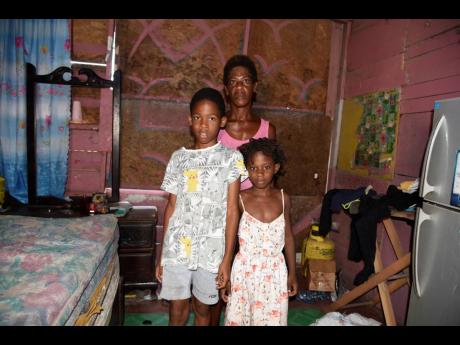 Jasmine Gillepsie (centre) said that her three children have not attended school since last March. Here, two of her children, Kobe Dixon (left) and Kimona Grant (right), stand with her in their Frog City house.

Since last March when the onset of the novel coronavirus (COVID-19) forced the lockdown of schools, thus curtailing face-to-face learning, students have transitioned to online learning. However, three of Jasmine Gillepsie's children have not participated in any of those classes.

They have not been getting lessons through printed materials distributed by the Ministry of Education, and neither have they been tuning in to television programmes through which lessons are being delivered.

Gillepsie, a resident of Frog City in Maxfield Park, St Andrew, said she is unable to purchase the data and devices that are needed for the classes.

"Dem nuh start school yet. One a dem go Calabar and him suppose to do him subject dem. The next two go two different primary school and mi feel bad. Mi would waah three little tablet for them because dem already miss out a lot," she said.

The Government has been appealing to parents to ensure that their children are engaged utilising the channels set out for them to learn.

"The education of our children remains a top priority. We need all of Jamaica to be involved in this process. School is in session, school is keeping, whether virtually, remotely or face-to-face," Education Minister Fayval Williams said in Parliament on Tuesday.

Dr Grace McCLean, acting permanent secretary in the Ministry of Education, said in December that there has been significant learning loss among school children since schools were closed in March.

Williams announced that 5,585 tablets and 147 laptops have been processed and distributed to students under the One Laptop per Child initiative. Countless numbers of individuals and corporate entities have also donated learning devices to students.

However, Gillepsie, 50, said she has not been lucky to secure any laptop or tablet for her children. She told THE WEEKEND STAR that she was working in the janitorial department at a school, but lost her job when the pandemic came. She said she has been to several interviews but none have been unsuccessful.

She said that her misery of joblessness was compounded about two months ago when fire broke out in the board house in which she lives with her children. The mattress on the bed was partially burnt.

"Is turn mi have to turn over the burn part and the four a we sleep on it. It really rough and it pain mi heart sometimes when mi hear dem say di spring a jook dem. Sometimes we nuh have nuh food fi dem, and is mi sick madda whe deh pon her bed help we out. A mi shoulda a take care of her but mi can't manage. Mi try get work but mi can't get any," she said.