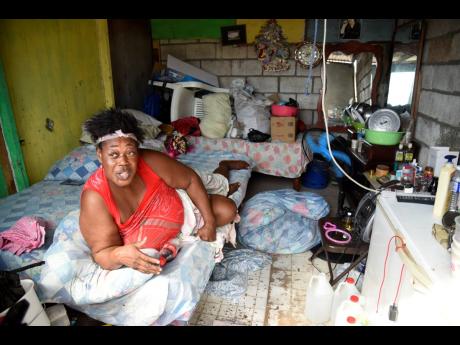 Yvette Spencer, a 48-year-old woman who appeared in this newspaper on January 14 complaining of being unable to walk since receiving a set of medication for pain from a medical practitioner in the Corporate Area, has died

Leighton Waugh, nephew of Spencer's, said she was discovered dead at her home located in a section of Maxfield Park called Frog City on Saturday evening. The cause of death is not yet known.

Neighbours said that Spencer was last seen alive about midday.

"Her mother gave her something to eat and she went to sleep after. About 4 p.m., her mother come and tell me say it look like something wrong with Evette because it was the first she was sleeping so long in the day, and she was waking her and she nah move. When mi go over the house, mi feel her hand and a try wake her, but her hand cold," the neighbour said.

She told THE STAR that the police were summoned, and later the undertakers took Spencer's remains to the morgue.

There is no evidence that either Spencer's inability to walk or her subsequent death is linked to the medication she received.

Spencer shared her story with THE STAR less than two weeks ago. Although she was grimacing in pain and was unable to walk, her main concern was to get back on her feet so she could take care of her 81-year-old mother, Francilla Patterson. She stated that she received an injection and a set of medication for pain on December 28, and was unable to walk thereafter. Spencer said she went back to the hospital on December 31, and was told by a doctor to discontinue taking the tablets. She said she feels constant "shocks" and "needles running all over" since being medicated and is hardly able to get out of bed in order to do the simplest of bodily functions, as her legs could not carry her.

Waugh said that family members were hoping that Spencer would have pulled through the difficult period she encountered.

"She did a complain about back pain before and dem give her a injection for pain, the pain never stop and she get worse to the point where she couldnt walk. From she get the injection, she can't walk. We want to know what happen and mi a wonder if is because we poor why dis reach her," Spencer's nephew said.

Residents yesterday described Spencer as a good person who will be missed.

"When she a sweep she sweep di entire lane. She was a hustler and always a do her little selling because she take care of her mother. She love her so til she used to bathe her everyday when she could walk, although her mama could a dweet herself. Now it turn around that it was her mom who was bathing her. Mi feel it fi her madda because she all a cry say is her hand and her foot dead, because she and Yvette was peas in a pod," one neighbour said.