Brother and sister murdered in their home 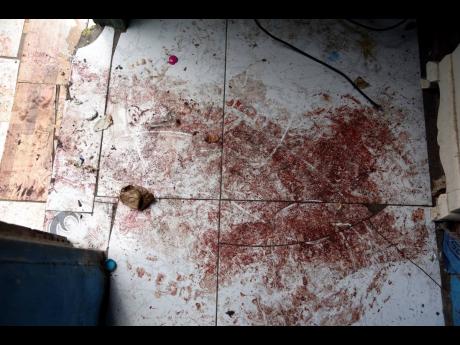 The bloodstained floor of the Penn Street dwelling where Jenell Thomas and her brother Omar Jarrett were killed Monday night.

Four years ago, Glendon Thomas lost a daughter to violence; on Monday night he lost two more children to bullets.

Jenell Thomas, 24, and Omar Jarrett, 29, otherwise called 'Brick Back', both of Penn Street in Jones Town, Kingston, were cut down by gunmen at their home in the community.

Reports are that about 9:59 p.m., residents heard explosions and summoned the police. On the arrival of the lawmen, Thomas and Jarrett were seen with multiple gunshot wounds. They were taken to hospital where they were pronounced dead.

Thomas, who is Jenell's father and Jarrett's stepfather, said he was at home when he was informed that something 'bad' had happened to his children.

"Is one of the neighbours come call mi and when mi come mi see mi daughter lie down on her face beside mi son. From last night (Monday) mi nuh sleep or eat. Mi daughter face mash up. When the police dem do dem ting, is at least 15 spent shell dem pick up. Mi just cry and done eno," he said. Jenell is the third daughter Thomas has lost since 2011.

"One of mi daughters died from natural sickness but the next one was shot seven times on Slipe Pen Road. She had left her ex-boyfriend and him trail her and kill her. He is behind bars now," Thomas said.

Too young to understand that their mother and uncle were murdered, Jenell's two children, ages three and four, were at their grandparents' home waiting for the bicycle and scooter that she had promised to purchase for them yesterday. Thomas said he does not know what could have triggered an attack on his children as he was not aware of them having any enemies.

It was a bloody night in the Corporate Area as detectives assigned to the Major Investigation Branch were called to that scene shortly after processing a double murder along Collie Smith Drive in nearby Arnett Gardens. The Kingston Western Police Division has seen several shootings in recent days.