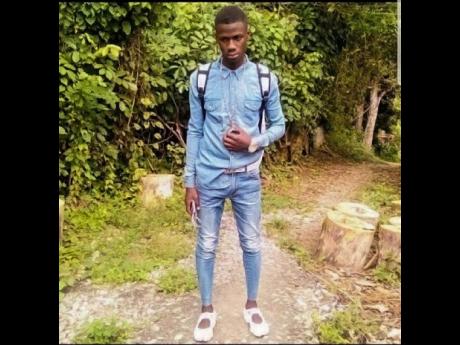 Central Kingston resident Kemardo McLean had his eyes set on serving his country as a member of the Jamaica Defence Force (JDF).

Having passed the entry test, and meeting other requirements, the 20-year-old was waiting on a call from the organisation to know if he would be among the latest recruits.

But this will never be. Kemardo was killed in a motor vehicle crash on Ash Wednesday at the intersection of North Street and South Camp Road. At least five other persons, including children, received serious injuries. Kemardo's father, Kemar, said he died just walking-distance from his Rae Town home.

"When I saw him he was playing games on his phone and usually if he was going somewhere he would tell me. Later in the day I was down the road playing cards when someone said that 'Blacks' dead. They also mention the names of the persons in the vehicle but I sit still because I didn't know it was him. It was when the person said it's my son they are talking I tell him 'no because I left him at home'. When I went there, I saw my son on the ground dead," he said.

Got out of control

Eyewitnesses had told THE STAR that the vehicle got out of control along South Camp Road and flipped in the air before crashing in a wall. Kemardo and others were pulled from the wrecked Nissan AD wagon, but he succumbed to his injuries on the spot. McLean said his son returned to Kingston about two years ago after spending most of his life in Airy Castle, St Thomas.

"He was somewhat a troubled child and he went to the juvenile centre but he came out and was completely rehabilitated. He had a little job with Digicel, got a place of his own and was just waiting on the army to call him. He wanted to be somebody great in life. I was so proud of my son," he said. "He was always smiling and that little boy never disrespected me yet. His mother especially is having a hard time dealing with this because he spent most of his life with her. All now I can't believe."