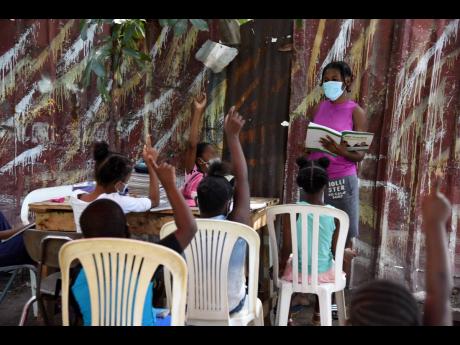 These children were eager to demonstrate to Williams that they know the answers to the questions being asked. 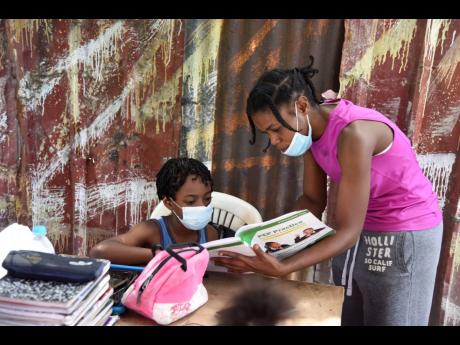 Nicole Williams tutors Kash-N Wongfatt at her home in in Greenwich Town, St Andrew on Friday. 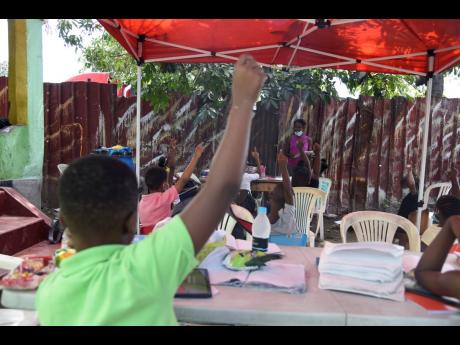 This ‘school’ in Greenwich Town, St Andrew, which is operated by resident Nicole Williams, has been over subscribed.
1
2
3

Before the pandemic, Nicole Williams was making a living as a school bus driver of sorts. Early mornings saw her picking up children from their homes in Greenwich Town, St Andrew, and taking them to schools. She would return for them in the afternoons and drop them at their homes. It was not the most lucrative job, but it helped to pay the bills.

However, when schools were shut down in March, as part of measures by the Government to contain the spread of the dangerous respiratory virus, Williams lost her only source of income.

"Like everyone else, I was affected but knowing the type of strong-will person I am, I knew I would not be down on my face for long. I got a tent and started doing smoothies, but that didn't work out the way I had hoped," Williams said. She then turned her attention to teaching children in her community.

"The smoothie business was really slow because a lot of persons had lost their jobs, but then I saw that there were a lot of children who were not able to access their online classes because they didn't have the devices to access the Zoom classes," Williams said.

Williams, who is certified in level one and two in early childhood education, through the National Council on Technical and Vocational Education and Training, began teaching five children, three of whom are her relatives. In a matter of months, the numbers swelled to 23 students, ages three to 12.

"Sadly, I have to turn back some children because I cannot manage it alone," said Williams, who operates the learning centre from the front of her yard on Third Street in the tough inner-city community.

"Some of the parents told me that their kids were dropping back in their academics. I would really want to help a lot more but I can't manage too much, so now I have to break up the classroom in groups where one set comes on Mondays, Wednesdays and Fridays, and the rest come on Tuesdays and Thursdays," Williams said.

"I have to set different sets of work because of the age groups that I am teaching, and the level that they are at. I usually have two classes daily, but there are times when it will just be one because I will not move on until all the children understand what is being taught, so even if it takes two weeks to move on, then so shall it be," she added.

When THE STAR visited the area last week, a large group of mask-wearing children, who should have been on mid-term break, were seen hard at work, their heads buried in their books.

"To be honest, you have to love children and love a job like this to do it because it is hard. Without patience, you will give up because these children drive me crazy at times, but I love it and I love them very much," Williams said.

She said she sometimes gets assistance from a friend, who helps her to teach, as well as prepare lunch.

"We sanitise and clean the place very often because there are a lot of small children here. I have a thermometer and so on, so once a child feels or looks sick, I will separate him or her from the rest, sanitise and take that child home," she said.

The Ministry of Education has conceded that there has been significant learning loss among students since the pandemic, and has sought to reverse the trend through the reopening of some schools and the distribution of printed materials to students. Some lessons are aired on TV and radio and many schools have introduced online classes.

However, the lack of access to devices and the cost for data to access lessons have been prohibitive. Williams said that she allows her students to connect to online classes using her phone and tablet.

"I don't want any of my kids to be left behind. Their addresses should never define who they are. Everytime I see their growth it's an achievement for me. As I mentioned before, the pandemic has caused some of them to drop back because online learning isn't for everyone, especially the smaller ones, so knowing I am helping to build their little minds means a lot to me," Williams said.