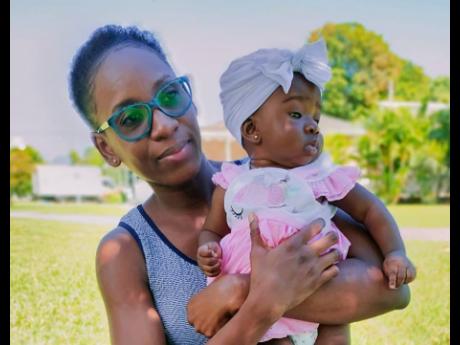 In June, Jadeene Burnett sought financial assistance to pay for heart surgery for her then six-month-old daughter Jhenesa Didia.

The life-saving surgery could only be performed overseas. A registered nurse by profession, Burnett has assisted in saving many lives but watched helplessly as her only child battles complex congenital heart disease.

On Monday, an elated Burnett contacted the newspaper to express her appreciation, as earlier that day, Jhenesa underwent a successful operation at the Children's of Alabama Hospital in the United States of America.

"I really want THE STAR and the public to know how appreciative I am of the support that I have received from my family, friends and co-workers. I am very grateful to all who shared on various social-media websites and those who responded to the newspaper article and radio broadcast. She is getting the help she needs, so thank you and may God bless you all," she said.

Baby Jhenesa was diagnosed with heart disease shortly after she was born and required multiple life-saving surgeries before turning a year old. Burnett was seeking US$232,141 (approximately J$34 million) for her to undergo a heart operation in the USA. Although she only managed to raised US$10,000 (approximately J$1.5 million) she and Jhenesa were able to travel to the USA on August 19 for medical attention.

Burnett said that the infant's condition had worsened "to the point where she needed to be intubated".

"Her heart stopped beating twice and they had to give her several doses of a drug to reverse cardiac arrest in order to get her heart beating again. Her heart function had deteriorated so much that she was scheduled to do the surgery on Monday at the nearest hospital, which is Children's of Alabama Hospital. I am really grateful that she was given this opportunity," the mother said.

Burnett said that Jhenesa is now stable and, at least for the immediate future, does not need further surgery.