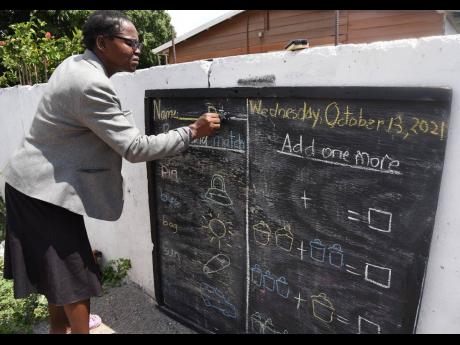 It was close to noon yesterday and three teenage boys, with hardcover books in hand, filed into Tandeka McKoy-Phipps' yard in Delacree Lane in St Andrew.

The boys had turned up for their daily two-hour lessons. McKoy-Phipps had her hands full as she was teaching classes at Union Gardens Infant School, but she nonetheless found time to teach the boys.

Each day, before heading out to her 9 a.m. shift at the infant school, McKoy-Phipps, with the help of others, makes daily rounds in Delacree and other areas, including Payne Land and McKoy Lane, to set lessons on the community blackboards for the children. She's been doing this since COVID-19 forced the closure of schools in March 2020.

"I just can't stop doing what I am doing. Even when I think I can stop, I can't because it is needed. The only thing I have cut down on is the food programme, because I am on my own with that. In my community, I just teach the children who I see running up and down, because it is essential for them to get a solid education," she said.

Face-to-face learning was suspended in March 2020 when the first case of COVID-19 was confirmed in the island. A phased reintroduction of face-to-face lessons began in November 2020, but it was halted in late February 2021 following the second wave of COVID-19.

Schools were again opened for face-to-face instruction in May, but this was only to accommodate students sitting exit examinations.

Although methods such as online classes have been employed, thousands of students across the country have not been keeping up with their schoolwork or showing up for online classes.

Since the onset of the COVID-19 pandemic, McKoy-Phipps, who has been an educator for over two decades, has been putting lessons on community notice boards and walls for the students who have been displaced due to the suspension of face-to-face teaching.

She said she has continued the community blackboard initiative because she doesn't like to see children being idle when they should be in school.

"I'm telling the truth, sometimes I even cuss off some of the parents and tell them to do better. Let the children stay inside until even after 2 p.m., and let them take up a book. Let them draw or read or something. Some of the parents don't have the interest in teaching the child, while others just don't have the experience. So instead of just seeing the problem and just talking, I had to come up with a solution," she said.

She stated that her teaching schedules sometimes continue into the late evening, as she often uses her nights to review the lessons.

"At 12 noon, another set of children come and I have them until 2 p.m.; and at 3 p.m. I have the peer teaching, which is the teenagers. They teach each other and I supervise them. A lot of these children were hoping to go back to face-to-face learning, but the schools are not opened as yet. Some of these teenagers are thinking about going to work, so I have them with me to try and prevent them from doing that," she said.