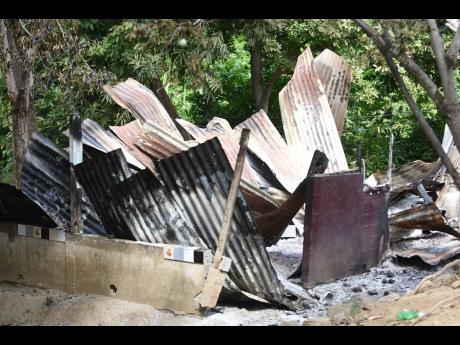 This house in Tankwell Hill was burnt to the ground after gunmen invaded the community early Thursday morning and murdered brothers Oshane Prince and Swayne Reece.

A mother's desire to start a new life with the father of her unborn child was dealt a devastating blow after her spouse and his younger brother were gunned down at their home in Bull Bay, St Thomas, early Thursday morning.

The deceased, Oshane Prince, 28, and Swayne Reece, 24, were reportedly ordered by their killers to step outside of their unfinished two-bedroom house before being shot and killed with weapons the police believed to be high-powered rifles.

The incident has left several residents in the occasionally quiet Tankwell Hill community still traumatised hours after the gnawing sound of loud explosions.

THE WEEKEND STAR understands that neither Prince nor Reece were the targets, but it was not enough to stop the bloodthirsty hoodlums who, after the gunfire had ceased, set two houses ablaze leaving more than a dozen homeless. There have been several murders in the area over a two-week period. A source surmised that Thursday's double homicide was connected to a shooting incident which took place in the area last week.

"Mi don't know what to think, or what to say right now," one resident said.

The deceased, both masons, were reportedly working on a construction site several miles away from their home. A co-worker said he was brought to tears when he went to the scene and saw his friends lying motionless in a pool of blood.

"Mi weak inna knees from morning... dem youth yah a good youths weh no involve inna nutten," a resident said. He added that since Saturday, he and the brothers were renovating a house in the area.

"A just last night (Wednesday) me and dem a sit outside inna dem yard a talk. Mi decide fi tek dem out of the community and bring dem pon di site cause work," he said.

Last week, THE STAR reported that residents in the nearby Eleven Miles area have been living in fear for the past year as violence continues to grip the crime-torn community.

Up to press time, THE WEEKEND STAR was unable to reach Superintendent Allison Byfield, head of the St Thomas Police Division, however, sources say that the killings were linked to a feud between warring factions. The source also said that another man was shot and killed in what is said to be a reprisal for the brothers' killing.