Woman who birthed five twins trying to get kids back 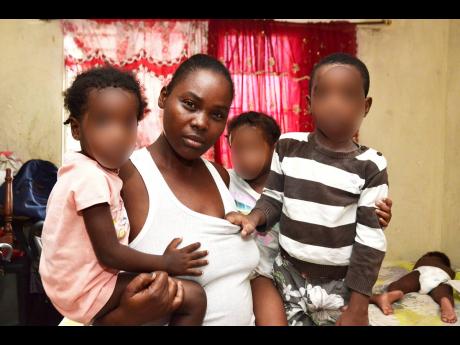 Kerry-Ann Anderson with three of her children.

STAR readers may easily remember Kerry Ann Anderson, who raised the eyebrows of Jamaicans when it was discovered that she mothered five sets of twins.

The 36-year-old also gave birth to two other children. Anderson, who was living in Denham Town, Kingston, at the time, sought the public's assistance in caring for the children and got it.

Fast-forward to 2021 and things are still not looking up for Anderson, who currently calls Spanish Town, St Catherine, home. Not only is she unemployed, but the five children who still lived with her, are in state care. She stated that she was employed as a janitor at a school, but lost her job two months after the pandemic hit local shores. Her biggest wish is to regain custody of her children.

"The judge say if mi get a work that mi make enough from she would give mi back mi children. Mi bawl every day because mi love and miss mi baby dem," said Anderson.

She admitted that on one occasion when she was administering discipline to her son, she beat him.

"Him did have a little bruise on his foot and dem charge mi for child abuse, but I love my son and the rest of my children," she said.

Anderson said that the search for meaningful employment has been a struggle and she believes that this is due to her academic background.

"I can't really read or write and I am a slow learner, so it hard fi mi get a big job. Mi wish mi could read properly and mi could be a doctor or a lawyer or one a dem big profession deh. Mi know everybody can't get di big work dem in the office but mi would want to suh mi can take care a mi children dem and shame all a who say mi couldn't do it," she said.

Anderson said there are times when she wanted to ask for the public's assistance but she shied away from doing so.

"When mi ask fi help yuh have people weh class mi up and talk all type a things about mi on social media and God know mi feel shame. Mi know people want to see who or where they are spending dem money but more time when dem post mi up, the people dem hangle mi up," she said. "Mi just want help to get a work weh mi can sort out the children and get dem back. Mi want mi baby dem under one roof."