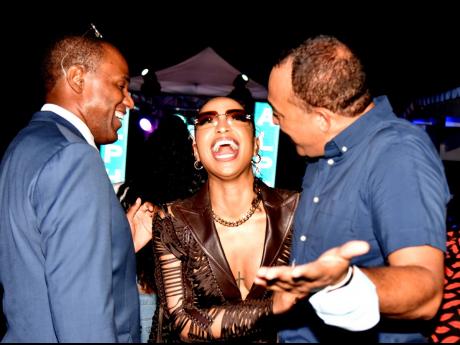 Prime Minister Andrew Holness said that the ministers failed to wear masks and observe the physical distancing protocols at the launch party for Shenseea’s album, Alpha, were “starstruck” and appeared to have”forgot their senses”.

Sisters Racquel Williams and Kaydreen Nelson, who were fined $200,000 in a St Thomas Parish Court last September for not wearing masks yesterday, urge senior government minister Olivia 'Babsy' Grange to consider giving them some of the monies she has been ordered to collect from her "starstruck" colleagues who "forgot their senses".

Grange, the entertainment minister, was on Thursday assigned by Prime Minister Andrew Holness to collect $100,000 each from each member of the government who attended the launch of Shenseea's debut album, Alpha.

Deputy Prime Minister and Minister of National Security Dr Horace Chang, Dr Nigel Clarke, who heads the finance ministry, Health Minister Dr Christopher Tufton, and Floyd Green, minister without portfolio in the Office of the Prime Minister, blatantly disregarded the requirements to wear masks and maintain physical distancing, which have been imposed under the Disaster Risk Management Act (DRMA).

Grange, who was also at the event as well as her junior minister Alando Terrelonge, wore masks.

"I believe they should be fined," Holness said as he contributed to the Budget Debate in the House of Representatives. He said Grange should collect $100,000 "from every minister who was there and make a donation to a worthy charity or to the defence of anyone who is so charged.

The DRMA, the key legislation used in the management of the COVID-19 pandemic, allows a judge to fine persons up to $1 million for offences like failing to wear masks. Last September, a judge in St Thomas decided to impose hefty penalties under the legislation, imposing $4.69 million in DRMA fines in one day. Two of the persons fined were Racquel and Kaydreen. They were each hit with $200,000 fines in a St Thomas Parish Court last September for not wearing a mask.

The sisters, ages 30 and 23, said they had to borrow money from the bank in order to avoid going to prison.

Racquel, who works at a call centre, told this newspaper last year that their mother had to borrow money to pay the fine.

Racquel said that the remainder of the funds to pay the fine came from loans and gifts from family members.

Reacting to Holness' edict that his errant ministers pay $100,000 each yesterday, the sisters expressed hope that Grange would send some of the money their way to help them clear the debt they have incurred.

"A chicken feed to them but it would help us a lot because wi a struggle fi pay back wi loan," Kaydreen said.

She said that she missed two consecutive repayment windows because she does not have the money.

"Mi sew sometimes, and a no all di time it gwan good, worst school never did a keep. We have around $280,000 leave so that money would definitely help me and mi sister," Kaydreen said.