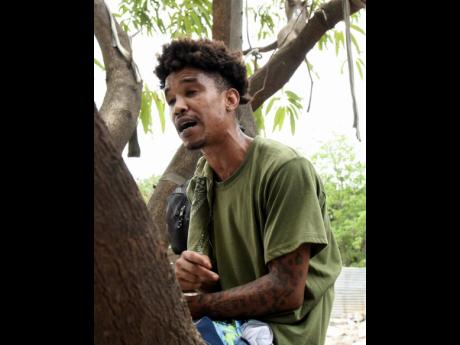 Mario Forbes talks about his experiences at sea as a fisherman.

For the past 12 years, Bull Bay, St Andrew resident Mario Forbes has been braving the seas at least five times a week for a good catch.

Most of the licensed fisherman's missions are successful and at the end of most trips, his boat is usually filled with prize-size fish, lobster and conch. But he said the journeys are not always smooth sailing. Not only has he braved a few tropical storms and heavy rains but he has even had to deal with pirates. He said he and his colleagues depend on divine intervention with each trip.

"More time if yuh nuh careful man come kidnap yuh on yuh boat. Yuh have certain points weh when yuh reach deh so you all fret, because once dem man deh know say you a go buy fish, they will rob yuh. Mi get rob one time. Mi just come out a a Spanish Town side and three boats run out pan we and dem just surround we and a bare gunshot start fire pon water top so we boat have to ease up," he said.

"Dem come over on our boat and ask where we a guh and we tell dem say we a go sea and dem search di boat and find couple stuff weh dem say dem need like gas and food. We did have money but dem never find it because we lock it off carefully. Mi know fisherman who man rob all dem boat engine and left dem stranded. A nuh ramping ting out deh man. More time the way we stress out when we come a land we nuh talk to people fi all a day. Sea is not always a pretty place," Forbes added. When it's not the threat of sea bandits, Mother Nature can be quite unfriendly.

"We guh through a whole heap a tings at sea weh we never face a earth. The sea is a very serious sea. In 2017, we a go Pedro Banks and lost out there for five days. We end up reach in Honduras water and is the coast guard find us and bring us back in. Only good thing is that we had food and water so we survive, but the experience was frightening. But we still go sea after that," he said. Despite the dangers, the fisherman said the trade can be profitable and can be a good profession for displaced youth.

"A lot of people leave school and don't have any subject so this is a career dem could take up but just get a licence. It can be profitable because is not just catching fish is the only business. Say for instance we buy a bottle of water for like $150, we can sell it back for all a $1,500 a Pedro Cay. One a mi bredren did bring mi into fishing and mi willing to teach others the ropes," Forbes said.