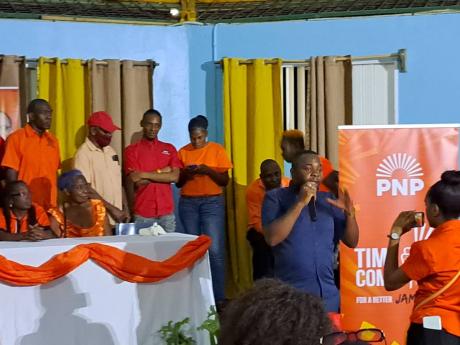 Rodney, 28, made his political aspirations known during the PNP's constituency conference for St James Central on Sunday at the Green Pond High School in St James.

"I promise the people of Jamaica that I will not be a conventional politician, because Jamaica really does need a change. I will be the prime minister of Jamaica," Rodney told supporters.

Rodney said that while most of his relatives support the ruling Jamaica Labour Party, his decision to side with the PNP came after Mark Golding, the party's president, reached out to him following the video's publication.

"I had a conversation with him, and an idea came up on my mind. Politics is what shapes the culture of every country, and a great change can only be made through politics," said Rodney. "Also, social media is the new era of life, and social media is what is shaking the truth.

"I am young, I am willing to learn," Rodney added. "I have faults, but I do have an open mind to learn, and one day I will definitely be the prime minister of Jamaica."

Rodney, who was formerly employed as a bartender at the Montego Bay-based S Hotel, came to national attention in June after he posted a video on several social media platforms accusing the hotel management of discrimination.

However, Chris Issa, the head of the Crissa Group, which operates the S Hotel, rejected Rodney's claims. S Hotel also released a statement denouncing Rodney's accusations as false and part of a smear campaign.