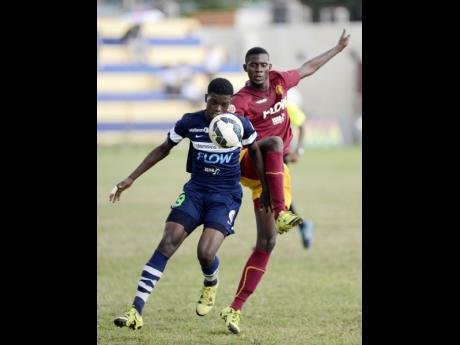 WHILE admitting there were valid points made by semi-final hopefuls Wolmer's Boys in their impassioned plea to replace Jamaica College's in today's Inter-Secondary Schools Sports Association's ISSA FLOW Manning Cup semi-finals, ISSA's Competition's Committee has thrown out the appeal lodged earlier this week.

ISSA ruled that the defending champions were fully compliant with its rules when they fielded players Ajani Talbot and Jahvan Russell against Wolmers' Boys in a Manning Cup quarter-final round game on November 11.

According to ISSA "Rule of 6 of the 2015 Schoolboy Football Handbook which was allegedly breached by Jamaica College clearly states that a player who receives a red card automatically misses the next match of the competition or extension of said competition ... the Competition's Committee has determined that any competition which is organised by ISSA and for which participation is dependent on the prior or simultaneous participation in the Manning and Walker Cups must necessarily be considered an extension of said Manning and Walker Cup."

Wolmer's had fined the appeal on the grounds that Talbot received a red card during a Manning Cup game on November 4, but played in the Manning Cup match on November 11.

However, ISSA ruled that Talbot had already sat out the FLOW Super Cup game on November 7.

"On the matter of cautions accumulated by players in the Manning/Walker Cups as well as the Super Cup, the committee wishes to indicate that the rules of both competitions clearly indicate the relevant penalties to be applied for card accumulations in EACH competition and does not reference an accumulation of cards across the Manning/Walker Cups and the Super Cup" the ruling added.

ISSA in the meantime admitted some changes were needed and would be addressed in the 2016/2017 season.

The ruling means that Jamaica College will be able to play in the semi-finals of the Manning Cup today where they will face Denham Town starting at 3 p.m.

Former champions St George's College will face Jonathan Grant in the other semi-final at 5 p.m.