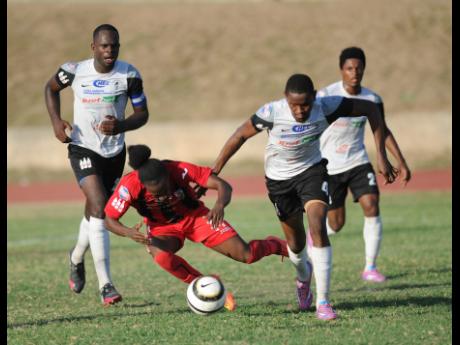 AT fourth and one place better than they were at this stage last year, Arnett Gardens' coach Jerome Waite remains buoyed by his team's ascendancy, fight, and determination to defend their Red Stripe Premier League title.

Waite said his will be showing no mercy against struggling Cavalier in tomorrow's encounter.

Cavalier are a distant 12th. At the same period last year, they were second position.

"We started out slow and we have seen a lot of improvement. Definitely a win that is what we are aiming for three points," Waite said at Thursday's RSPL press conference Thursdays at the SportsMax Studios.

"We are where we wanted to be and definitely the objective is to retain the title this year," stressed the coach.

Though his team was beaten 1-0 by Cavalier earlier this season, Waite said he is confident of a win tomorrow.

Cavalier's manager Toni Ann Cowan is not perturbed despite their subsequent struggles.

"The only thing I think we need to do differently is finish our chances as a team, the last encounter that we had we had the better chances and just weren't putting them away, so hopefully we can put them away," she said.

She said there is no fear of the reigning champions.

"We don't have to do much to put confidence in the team to go up against Arnett; it was our first win of the season when we outplayed them and we are always looking forward to playing Arnett again and get the same victory."