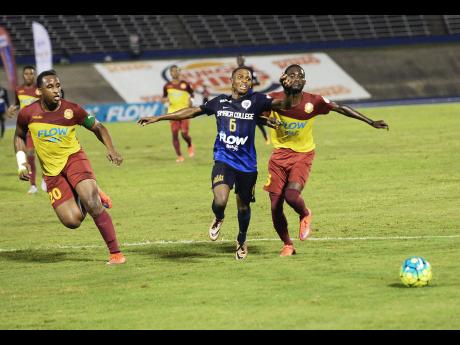 Wolmers Nickashe Murray (right) and Jamaica College Javoy Belnavis battle for possession of the ball during first half of their manning cup final at the National Stadium on Saturday.

Although unable to break Wolmers Boys' School's 22-year Manning Cup drought, coach Vassell Reynolds revealed some satisfaction that his charges gave it their all in coming up short against a very good Jamaica College team in Saturday's final.

"I think we gave it our all. Some things just never worked for us, and overall, we are pretty pleased," he said in an interview.

Reynolds' charges entered the final full of confidence having earlier won the Flow Super Cup but it was not to be.

"It hurts. I think, overall, we had a good season. We would have been very disappointed that we came this close, but we would have lost to a very good JC team," Reynolds continued.

Reynolds, though not assigning blame, admitted that conceding two early goals set his team back. It was one of the first times the maroon-and-gold school had gone behind in the Manning Cup this season.

"I thought we started a little bit flat and gave them a little bit too much room to operate. We really wanted to press them early. We paid for it, but, overall, we really came out second half and gave a good performance; it just wasn't good enough," he bemoaned.

Wolmer's had scored their goal in the final kick of the first half, but JC held on for their fourth consecutive final triumph via Tyreke Magee and Donovan Dawkins strikes.