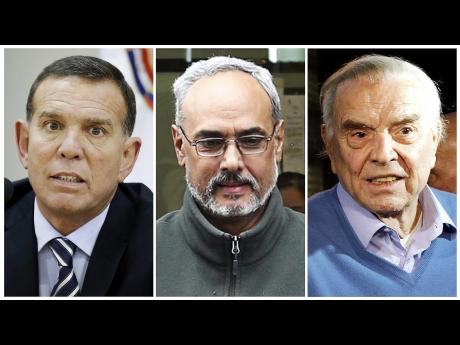 Three former South American football officials charged in the FIFA corruption scandal made a fortune off bribes in exchange for rigging the process for awarding lucrative commercial contracts to the sport's biggest tournaments, a prosecutor said in closing arguments at their US trial.

The high-ranking officials "took money for themselves instead of putting the interests of the football organisations first", Assistant US Attorney Kristin Mace said yesterday in federal court in New York.

Defence attorneys were to begin giving their closing arguments later yesterday. Jury deliberations could begin as early as this afternoon.

Mace, in her closing argument, told jurors that for sports marketing firms, paying bribes was a routine cost of doing business. The arrangements deliberately sabotaged fair and open bidding for the commercial contracts that could have preserved the integrity of the sport and produced better deals for the football federations, she added.

Prosecutors have sought to build their case on the testimony of marketing executives who have pleaded guilty and agreed to cooperate against the defendants, secretly recorded conversations about tens of millions of dollars in bribes and internal documents, including ledgers detailing the amounts paid.

Yesterday, Mace recalled the testimony of a cooperator who testified about a ledger that listed the bribes for Napout as 'Honda' and included one entry for Paul McCartney concert tickets worth more than $10,000.

After the defence questioned whether the McCartney concert actually took place, the government called Kevin Jonas, a former member of the pop sensation Jonas Brothers, to testify that he attended the show on November 11, 2010, in Buenos Aires, Argentina. Napout took the occasion to collect a $200,000 bribe that day, prosecutors said.

The sprawling FIFA investigation has resulted in charges against more than 40 football officials, marketing executives and entities.