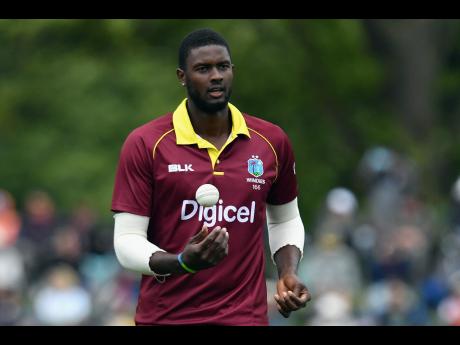 Test captain Jason Holder has urged the West Indies Under-19 squad to be aggressive and take the initiative, as they prepare to defend their title at the Youth World Cup in New Zealand starting this month.

Holder, who also leads the One-Day International side, was part of the regional Under-19s unit, which contested the 2010 edition of the ICC tournament also staged in New Zealand.

"Be the frontrunners, set the tone in every game you play," said Holder, who made his senior team debut three years following his outing at the Under-19 World Cup before being appointed Windies ODI captain a year later.

"Try to be upfront, be aggressive and not be lagging behind and playing catch up, that has probably been the trend in West Indies cricket for a number of years.

"It will be really good to see these guys come back after being the defending champions, setting the tone for the tournament."

Captain of the successful 2016 side, Shimron Hetmyer, said winning the tournament had been a massive experience and threw his support behind the current squad.

"Words can't explain the feeling, it was fantastic. It was so, so great for us as the first time any team coming from the West Indies to win the Under-19 World Cup," said the 20-year-old, now a member of the senior side in all three formats.

"Go well guys, from me here and the rest of the West Indies team, I wish you all the best - just bring it home for us."

Fast bowler Alzarri Joseph a prominent member of the title-winning side under Hetmyer, said the tournament was important as it served as the ideal launching pad for an international career.

"It's a good platform for younger players to give themselves a name, so when they come back to their respective regions, they can get a chance to play first-class cricket and make a career from this game," said the Antiguan, who has gone on to play Test and ODIs for West Indies.

"You have to take every opportunity you get and make every chance count. Boys, come out, play hard, really play as a team and try your very best to get the World Cup back home to us in the West Indies."

West Indies Under-19s, led by Emmanuel Stewart, will open their campaign on January 13 against hosts New Zealand at Bay Oval in Mount Maunganui.