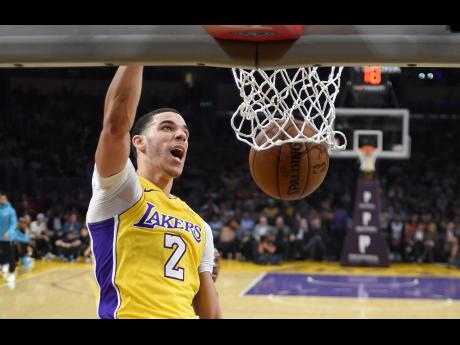 Los Angeles Lakers guard Lonzo Ball dunks during the first half of the team's NBA game against the Charlotte Hornets last Friday.

Ball, the outspoken father of Lakers point guard Lonzo Ball, made his latest outlandish statement to ESPN for a story published Sunday. He said Walton is too young to coach and "has no control" of the team comments that Walton said didn't bother him, but ones that clearly angered some of his NBA coaching colleagues.

"ESPN is an NBA partner, and they've been a great one," Carlisle said. "Part of that partnership is the coaches do a lot of things to help them with access, interviews, all those kinds of things, and in exchange for that, they should back up the coaches. Printing an article where the father of an NBA player has an opinion that's printed as anything legitimate erodes trust. It erodes the trust that we built with ESPN, and our coaches are upset.

"Luke Walton does not deserve that," Carlisle added.

Longtime ESPN college basketball announcer Dick Vitale wrote on Twitter that Ball totally aggravates me more than any other personality in my 39 yrs and lamented that media outlets "enable him to scream his absurd opinions by providing a forum for him".

The Lakers beat Atlanta 132-113 on Sunday night to snap a nine-game losing streak. At the team's morning shootaround, Walton said he is certain that he has the support of the Lakers' front office and that he was mostly concerned that Lonzo Ball could be adversely affected by his father's comments.

Walton said before the game that some coaches have reached out to him after the comments.

"They're all on the same idea of it's our job as coaches to coach our teams and not be concerned with parents and what other people outside the organisation think," Walton said. "A lot of them have shown their support as far as they know what it's like coaching young teams and from what they see, how hard our group plays, just like I do."

Lonzo Ball did not seem affected one way or another.

"He's going to speak his mind," Lonzo Ball said of his father. "He's not going to change."