Gayle on the brink of greatness 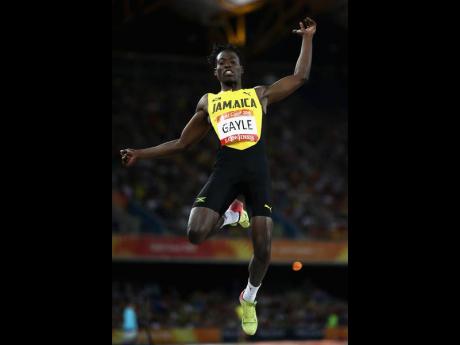 Long jumper Tajay Gayle has been on the cusp of athletics greatness for the past two seasons and MVP Track Club coach Paul Francis believes he could make the monumental leap which will put him among Jamaica's elite athletes this season.

The 22-year-old jumped 8.20, .04 off his personal best, to win the men's long jump at the Grenada Invitational last weekend.

That performance is coming off the heels of a decent indoor season, where he jumped 8.10 to finish second at the Muller Indoor Grand Prix, and last season, where he finished just outside of the medals at the Commonwealth Games, secured a silver medal at the NACAC Senior Championships, and was the winner in the event at the Rabat leg of the IAAF Diamond League series.

Though he has been making steady progress, his athletic prowess has not yet captured the athletics world, but Francis thinks it will not remain this way for much longer.

"Young Gayle, I suspect, will be able to stake some kind of claim this year for people to start taking notice. So we are just keeping our fingers crossed that everything goes well in training so that he can show what he is able to do, including doing well at the World Championships in Doha," Gayle said. "It has been my experience that the public don't take notice when a talent is developing. They want to see medals, then they begin to look at the event. We have been seeing similar attitudes in the male throws. Even though we have a world number one (Fedrick Dacres), they want to see it on the big stage for them to begin to look at the event."

The former Papine High School student athlete registered his 8.20 on his second attempt on Saturday and was instructed to pass on his remaining tries.

"On Saturday, the arrangement was for him to leave the competition early, but we strongly believe if he had remained he would have jumped farther," Francis said.

"He is a talented youngster, but he works hard. He was not a standout at Champs or a favourite. He got maybe a point or two at long jump and high jump at Champs. But since entering university, we have focused on the horizontal jumps with him and he has flourished, and I believe there is still quite a bit more that our nation would be happy to see in the near future."