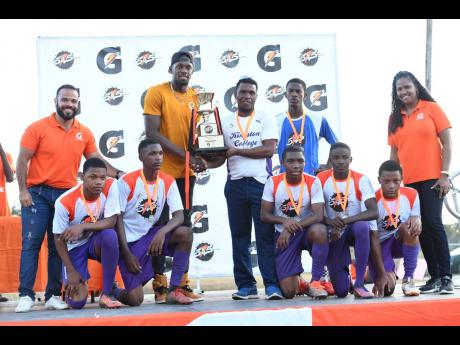 The Kingston College (KC) five a side team that captured the Gatorade 5v5 tournament in March is set to leave the island on Monday for Madrid, Spain to participate in the Global final.

KC qualified for the multi-national tournament after beating Excelsior High 2-1 in the local final on March 10.

They will take on teams from South America, Central and North America including outfits from Argentina, Brazil, Peru, USA and Mexico.

One of the players who will be featured on KC's team is 16 year Qwayne Williams who is fresh off a trial with the Philadelphia Academy Union.

Williams was invited to train with the Pennsylvania outfit after his impressive performance with KC's Under 16 team that captured the Urban and Island titles last year.

His mother, Sofia Williams, said that the coaches were pleased with her son's performance but want him to continue to develop his game.

"They want him to keep on working on his game, and so I am hoping opportunities like these, where he gets to go to Spain, can really help him to do that," she said.

"I am really happy for what has been happening at Kingston College and what they are doing for the development of these boys."

Williams is expected to feature for KC in the upcoming Manning Cup season, as the Purples try to defend their title. The boys from North Street ended their 32 year wait to win the Manning Cup by beating St George's College 3-2 in a stunning final.