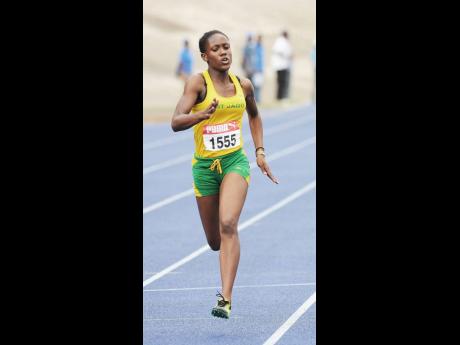 Natalliah Whyte during her time as a St Jago High School athlete.

Natalliah Whyte continues her impressive 2019 form at the NCAA Division I preliminaries last weekend by posting a fast 11.16 seconds to qualify for next's week final in Austin, Texas.

Whyte's effort at the regional championship placed her among the top eight fastest times in the division this year.

And the former St Jago High School standout is focused on executing the perfect race next week as she hopes to inch closer to sub 11 seconds.

"I never think about times. I am always patient, so with 11.16, I can only hope to progress," she told STAR Sports yesterday.

The 21-year-old shocked many when she produced 11.04 seconds last year, and with the likes of Twanisha Terry, Kayla White, and Sha'Carri Richardson, who have all gone under 11 seconds already this season, Whyte could join the illustrious sub-11 seconds club.

Though she still has hopes of representing Jamaica at the IAAF World Championships in Doha in September, Whyte says she is taking things one step at a time.

"I am totally focused on the NCAA Championships and after that then we see where we go from there," she said.