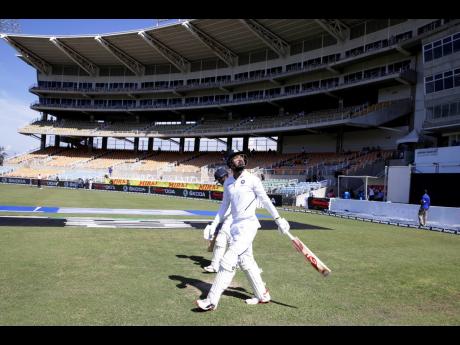 Sabina Park’s North Stand is scantily populated as India’s openers KL Rahul (front) and Mayank Agarwal walk to their creases for day one of the second Test match against the Windies last Friday.

Legendary Windies batsman and former captain Sir Viv Richards said he feels sorry for the diehard West Indies fans who continue to endure disappointment with the inconsistent regional side who once again succumbed to a series loss, this time to India.

Richards, who was part of the commentary panel for the series, says the defeat didn't do the Caribbean fans any justice and the team folded too easily on home turf.

"I feel it for the little fans who came out to support the team," Sir Viv told STAR Sports. "We didn't play anywhere near our potential and we showed just little sparks here and there. Our batting needs to improve tremendously. I am a bit more encouraged by our bowling, but when you look at the two matches, the stadiums were empty because no one likes a losing team, and I believe once we start winning, the fans will come back."

The man, who was once dubbed the 'Master Blaster' for his swashbuckling batting style, says he still believes the West Indies can return to consistent winning ways, however, a lot of changes need to be made, especially at the administrative level.

"I was very disappointed when we changed the coaching staff before the World Cup," he said. "We basically were acting on similar paths in the past. I believe if we had kept that group together, we would have been in a better position. I think we have taken two steps backwards in that regard, and we need to start with proper administration before the on-field issues can be worked out."

Young Windies fan Atishai Mansingh, from Kingston, says he is disappointed with the team's performance and something needs to happen sooner rather than later to help to save the popular pastime.

"Look around, the stadium is empty because no one wants to see a team getting bowled out for 100," he lamented. "The team is performing poorly and no one supports losers."

But the young cricket fan says he will continue to support Test cricket, despite the poor performance of the Windies team.

"I love Test cricket," he said. "It is in my blood and my family loves cricket as well. The thing I love about it is that you can get a T20 (Twenty20), ODI (one-day international) game in a Test match all in one."

Female supporter Alena Wright, from Vineyard Town, says it was her first time watching a Test match, but she did not come to support the Windies, she wanted to see Indian's batting maestro, Virat Kohli.

"I always see Kohli bat for India on TV, so when I heard India was coming to Jamaica, I decided I want to see him in live and living colour," she said. "To be honest, I don't really like Test cricket. In my estimation, Test cricket is dead, but I will pay to see Kohli bat in any format."

The Windies failed to win a single game during the T20, ODI and Test series against India.