Dacres: Medal shows that anything is possible 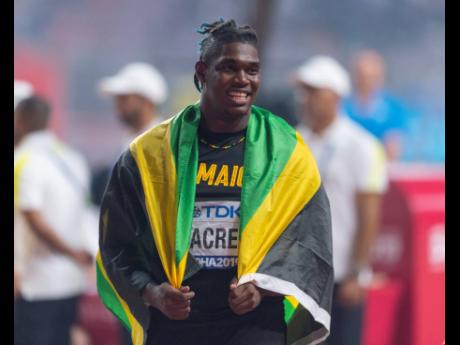 F edrick Dacres says he hopes the silver medal he won in the men’s discus throw at these 2019 World Championships yesterday will serve as a source of motivation for young throwers in Jamaica as he became the country’s first medallist at a global athletics championships in the discipline.

“I think this medal shows that anything is possible when you don’t limit your mind to what you see around you,” Dacres said. “When I was coming up there was no one doing this but it can be done if you have the right guidance.”

He continued: “ We are actually here now. We are at the World Championship with a silver medal and it shows that the country has broadened its horizon in track and field.”

Dacres sailed his disc to 66.94 metres into the Doha night sky on his second attempt for his best effort. That throw was only bettered by Sweden’s Daniel Stahl, who has been beating Dacres all season. The Swedish giant registered 67.59 to win the gold medal, while Lukas Weisshaidinger of Austria won the bronze with 66.82m.

Dacres’s medal has taken the country’s medal count to four at these championships.

Natoya Goule, who was tipped to medal also, was livid after she finished sixth in the women’s 800m final in 2:00.11.

The national record holder in the event said that she was impeded again by Uganda’s Halimah Nakaayi who went on to win the race.

She told STAR Sports that she will protest against the Ugandan.

“ Again, the same girl bounced me as she did in the semi-finals. I think I executed the way that I wanted to,” she said. “I did what my coach said I was supposed to do and I know if she didn’t push me I would have been fine”

Goule faded into sixth after maintaining the silver medal position for more than 500 metres of the race.

“I have to just go back to the drawing board and come again for the Olympics next year,” she said.

Nakaayi stopped the clock at 1:58.04, to lower her national record. Americans Raevyn Rogers and Ajee Wilson finished second and third in 1:58.18 and 1:58.84 respectively.

For the second straight World Championships, the men’s 200m final will not feature a Jamaican.

Yohan Blake, Rasheed Dwyer and Andre Ewers all crashed out of the event at the semi-final stage yesterday.

Blake finished sixth in semi-final three with 20.37. It might be the last time the former St Jago High sprinter runs the event as he says he will concentrate on the 100m from now on.

Dwyer failed to shrug off the rust of not competing since August as he posted 20.54 to finish fifth in semi-final one, while Ewers only managed 20.61 in semi-final two.

In the women’s 200m preliminary round, Elaine Thompson and Shashalee Forbes advanced to the semi-finals but Schillonie Calvert-Powell’s effort was not good enough.

Thompson, who is trying to make amends for her disappointing fourth-place finish in the 100m on Sunday, cruised to 22.61 seconds for second behind American Britanny Brown who posted 22.33.

Forbes seemed to have given it her all as she pushed for the automatic third-place spot with 23.15. Calvert-Powell could only manage 23.52 for seventh in heat seven.