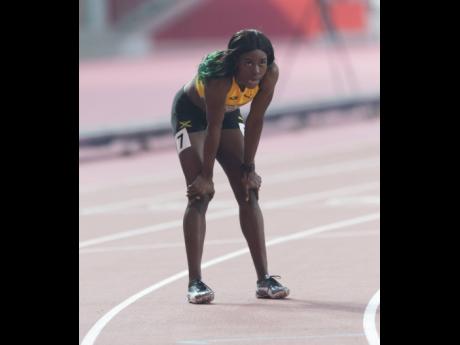 Shericka Jackson after completing her run in the women’s 400m semi-final at the Khalifa International Stadium during day five of the IAAF World Championships in Doha, Qatar yesterday.

Tomorrow, the women's 400m final will answer a lot of questions, and Stephenie Ann McPherson and Shericka Jackson, the two Jamaicans in the race, are seeking different answers.

Jackson's performances over the past four seasons have cemented her place as one of the front-runners in the event. But she is still searching for that elusive global title.

Her performance against Bahamian Shaunae Miller-Uibo, a rival from her days as a Junior, competing at the Carifta Games, in the semi-finals yesterday suggests that her wait may continue for at least another year. This, as Miller-Uibo was unbelievably easy in finishing in front of the former Vere Technical athlete in 49.66 seconds.

Jackson was third in 50.10 seconds, while American Wadeline Jonathas was second in a personal best of 50.07 seconds.

But there have been whispers that the 2016 Olympic Games bronze medallist is in the best shape of her life and is waiting to unleash in the final tomorrow at 3:50 p.m.

McPherson, who is at the back-end of her career, is in dire needs to run under 50 second again after achieving the feat way back in 2013. The former Manning's School athlete won her semi-final in a season best of 50.70 seconds.

"I know I have what it takes to get under 50 seconds because I have been training good and if I execute right it will happen," she said. "The first 100m was alright, but I didn't run the back straight away well, so I need to go and work on that."

Along with Miller-Uibo, McPherson and Jackson will also have to contend with Salwa Eid Naser from Bahrain who posted 49.79 to win heat one. The Bahraini runner has the second fastest time in the world this year with 49.17 seconds.