Clayton dreaming of a podium finish 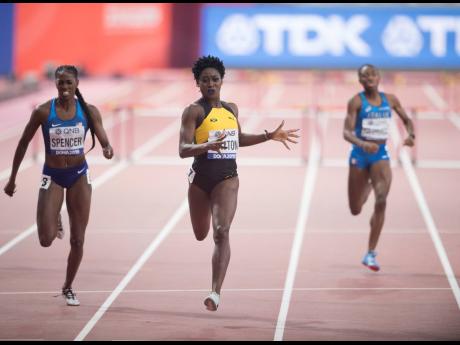 Rushell Clayton continues to have an unbelievable 2019 season that is quickly propelling her into the elite stratosphere of athletics.

Clayton won her semi-final in the women’s 400 metres hurdles convincingly yesterday in 54.17 seconds to make her first final at a global athletics championships and, she is now dreaming of what a podium finish could mean for her career.

“ If I finish in a podium position it will be a life changer for me,” she said.

Clayton’s ambition is quite realistic as she is going into tomorrow’s final with the third fastest time as only American world record holder Dalilah Muhammad and her compatriot, the World Under- 20 record holder Sydney McLaughlin, have run faster at the championships.

The former Vere Technical athlete shocked local athletics fans when she ran under 55 seconds for the first time at the Jamaica Senior Championships when she posted 54.73.

That performance enabled her to secure races on the Diamond League circuit.

“Winning at Trials has changed a lot for me,” Clayton admitted.

She followed up her performance at Trials with 54.16 personal best exactly a month later at the Muller Anniversary Games in London.

“If winning the National championships has changed so much for me, can you imagine what a podium finish will do?” she questioned.

The 26-year-old is also continuing the country’s rich legacy in the event as Deon Hemmings and Melanie Walker have claimed global titles for the black, green and gold before.

“These ladies have done it before and that tells me that I can do it,” she said.

“It is my first World Champs and to get into the final is a great thing. It’s just upwards from now. I have nothing to lose.”

Shiann Salmon, the other Jamaican in the semi-finals, finished third with another personal best of 55.16 seconds but her time was not good enough to advance.