Bennett vows to come back stronger next year 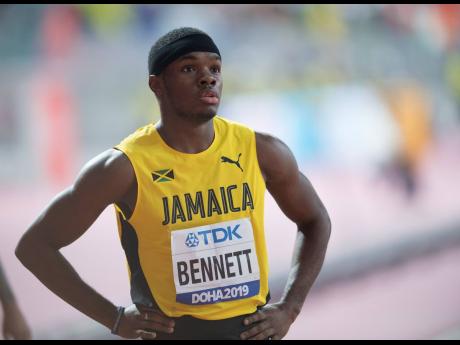 Gladstone Taylor/Multimedia Photo Editor Orlando Bennett of Jamaica watches a replay of his 110m hurdles semi-final on the display screen during Wednesday’s action at the 2019 IAAF World Championships in Doha, Qatar.

Orlando Bennett was disappointed after he failed to advance to the men's 110m hurdles final on Wednesday, but he expressed gratitude for all the lessons he learnt in his first season as a professional athlete.

The Calabar High past student finished sixth in semi-final one in 13.60, 0.33 seconds slower than the personal best he did at the Jamaica National Championships back in June.

"I am really grateful. I had the highest intention of making the final, but it didn't happen, and I just have to move on," Bennett said. "It was a tough race because the athlete to my right kept hitting me, but I guess that is something that I have to get used to at this level."

Bennett, who won a silver medal at the World Under-20 championships last year, is the youngest athlete on Jamaica's team here.

"I can't complain because I have had a great season," he said.

He said that he would come back stronger next season as he tries to become an Olympian.

"I have to get stronger and faster next year. I will go back and talk to my coach and take it from there," he said.