Groom has great expectation for Stranger Danger in Diamond Mile 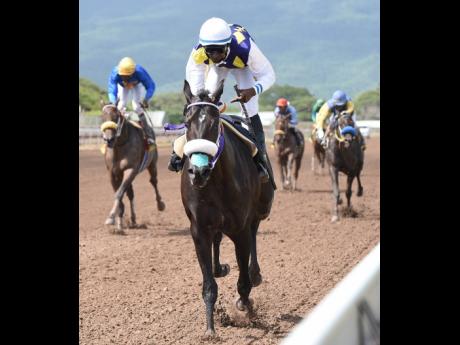 Michael McLean, groom of the rich Diamond Mile anti-post favourite STRANGER DANGER, is very confident about his horse's chance of winning the prestigious race on Saturday at Caymanas Park.

The Diamond Mile, the richest race in the English-speaking Caribbean, is being sponsored by the Betting, Gaming and Lotteries Commission at a value of US$115,000 ($14.5 million).

STRANGER DANGER, who is unbeaten in nine starts, have been drawn in gate nine alongside his stablemate and second favourite SHE'S A MANEATER, who will run from gate 10.

McLean, who has been a groom since 1980, said it would be a dream come true for him if his horse is successful in the race on Saturday.

"Everybody's dream is to win a Diamond Mile because it is the richest race at Caymanas Park, and so it would be a great feeling if my horse win it on Saturday," said McLean.

"He has had an excellent workout coming into this big race because the trainer is very experience, and so he is comfortable and his legs are OK and he is in good health," he said.

"Everything is now left in the jockey's hands, because the trainer and owner have done their work and I have also done my work, too, and so I am just hoping for the best, because anything can happen in the race," McLean said.

He pointed out that the other competitors in the 16-horse field are good, but he expects the race to be decided between STRANGER DANGER and SHE'S A MANEATER.

"He has an excellent chance of winning the Diamond Mile, but I think it is going to come between him and SHE'S A MANEATER because she is good horse and her jockey, Omar Walker, is very experienced, and so that is where the race is going to be won," McLean said.

"My horse have won nine races straight, and he has run the mile twice before and he has done well. He is improving with every race and so I am expecting great things from him on Saturday in the Diamond Mile," he said. STRANGER DANGER will be ridden by Phillip Parchment.