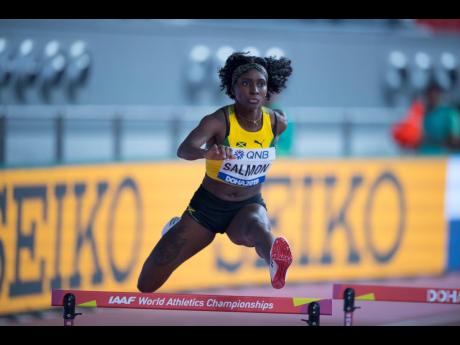 Shiann Salmon clears a hurdle during the preliminary round of the women’s 400m hurdles at the 2019 World Athletics Championships on October 1.

In her first season as a senior athlete, Shiann Salmon made it to the semi-final of the women's 400m hurdles at the 2019 World Athletics Championships, just missing the final by three spots.

But the former Hydel High School standout is far from satisfied with that accomplishment.

This has prompted her to make the switch from G.C. Foster College, where she was being conditioned by Maurice Wilson, to Austin, Texas, now under the tutelage of Tonja Buford-Bailey, a standout in the event for America in the 1990s.

The 20-year-old is expected to sign a shoe contract in January and forgo her eligibility to compete on the US collegiate circuit but, according to her, she will continue to pursue her education at the University of Texas, Austin.

"I have always wanted to study and train in the USA and in my opinion, coach Bailey is the best coach for me.

"She understands every aspect of my event and she is a very good person overall," Salmon told STAR Sports.

Salmon, who won a silver medal in the event at the World Under-20 championships in Tampere, Finland in 2018, lowered her personal best three times last season.

She produced a gutsy run in the final of the event at the Jamaica Senior Championships to register 55.39 for second place, and followed up that performance with 55.20 in the preliminary round at Worlds and 55.16 in the semi-final.

"As with every new environment you go into, it will take some time to completely adjust, but I like it so far," she said.

Ashley Spencer, a top performer in the event for many years, is one of the few world-class athletes who Salmon now has to compete in training with.

"I think Ashley will push me, but overall I think I have to be at my best because it is a really good training group," Salmon said.